Yes, it really is rocket science 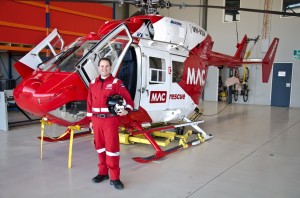 Since graduating with his MBBS in 2000, aerospace medical specialist Thomas Smith has scaled some lofty heights.

The 2003 Rhodes Scholar has trained at NASA’s Kennedy Space Centre, conducted field research in the Peruvian Andes and delivered life-saving treatment in the air to patients across more than 20 countries. 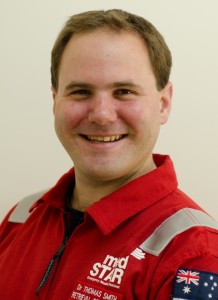 Dr Smith’s journey from University of Adelaide medical student to a clinician-scientist specialising in critical care and aerospace medicine has taken just 12 years.

The former Scotch College student, who achieved five perfect scores in Year 12, went on to become President of the Adelaide Medical Students’ Society and was awarded the Australian Medical Association Student Medal “for the best final year medical student”.

Just two years out from graduation he won a Churchill Fellowship to study aerospace medicine at NASA’s Kennedy Space Centre, Cape Canaveral, in the United States.

“I loved my time at NASA,” Dr Smith said.

“A highlight was meeting two very distinguished University of Adelaide graduates working there – astronaut Dr Andy Thomas and Dr Des Lugg, who became Chief of Medicine of Extreme Environments at NASA through his expertise in polar medicine.”

After NASA, Dr Smith completed his PhD at Oxford, where he is still based as an academic clinical lecturer in a combined university/hospital position, undertaking research focusing on how the heart and lungs respond to low oxygen levels.

“This is important for patients in intensive care or with lung disease, for anyone living at or travelling to high altitude such as mountaineers, and for commercial pilots and passengers,” he said.

In parallel, Dr Smith has continued with his clinical training in anaesthesia and intensive care medicine and has developed a special interest in aeromedical critical care, hence his recent trip to Adelaide to work with MedSTAR.

“It has been a great privilege to study and work in Oxford, learning from inspiring people in such beautiful surroundings. My research has been intellectually thrilling and I have also had the opportunity to soak up some of the rich and diverse life on offer here.”

His tip for new graduates on choosing a career path?

“I have tended to follow the advice given to me by my Year 1 primary school teacher: it’s not a race!”