Law wins out over music and maths

Posted on February 3, 2013 by Candace Gibson 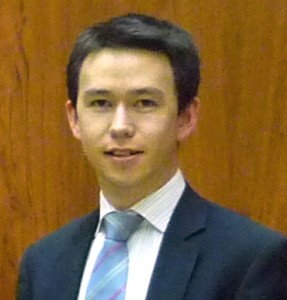 Triple degree graduate Brendan Lim has kept his career choices wide open, holding degrees in law, music and mathematics from the University of Adelaide. A legal path beckons for now, with the 28-year-old currently completing his JSD at Yale Law School after a stint as Counsel Assisting the Solicitor-General of Australia.

Brendan is a General Sir John Monash Scholar and graduated top of his class in Law, winning all the Honours prizes as well as the prestigious Stow Medal and the Honours Alumni University Medal.

Details of any scholarships awarded:

How did these scholarships assist you in your study?

I have always been conscious that these scholarships reposed in me a great deal of trust that I would make good use of the opportunities they afforded.  I continue to be motivated by that trust.

What have you been doing since graduation?

I have worked at the Federal Court and the High Court and for the Commonwealth government as Counsel Assisting the Solicitor-General.  I also lived for a period in New Haven, Connecticut pursuing postgraduate studies at Yale University.

Why choose University of Adelaide to study?

The University of Adelaide allowed me to commence my studies in my final year of secondary school.  It allowed me to pursue the novel combination of degree programs that I wanted to pursue.  It backed up those accommodations with a generous scholarship, excellent facilities and an enviable location to spend five-and-a-half years studying.

What were the best parts of your degree at the University of Adelaide?

It would be invidious to single out individuals, but in each of my disciplines I found teachers who inspired me.

Did you take part in any extra-curricular activities?

There is a rich cultural life at the university that underpins the sense of community that is so central to the academic enterprise.   I participated in the badminton and debating clubs.  I was also quite active in law school mooting and was President of the Law Students’ Society.

Apart from your academic qualifications, how did your experience at the University of Adelaide shape you as a person?

Don’t treat your time at university as merely a means to a degree.  The intrinsic value of the degree itself will be spent after a few years at most.  After that, you will be thrown back on your actual learning, as well as your ability to adapt to new challenges and to learn from new experiences.  There is simply no substitute for using your time at university to engage in the process of learning, as distinct from appearing to acquire its product.  In short, do the readings, attend classes, and have something to say in those classes.