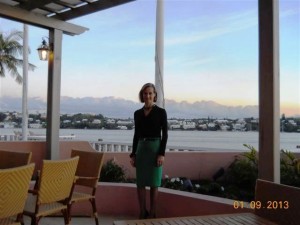 University of Adelaide graduate Jane Chapman has been working in Bermuda since 2008. The Adelaide-trained anaesthetic nurse left South Australia for London in 1997 to take up senior posts at St Mary’s Hospital in Paddington before transitioning into healthcare and capital planning and relocating to the tropical paradise where she currently resides.

This is Jane’s story:

“I work for the Bermuda Hospitals Board, which is responsible for the management of two hospitals on the island – one general acute and one psychiatric healthcare facility, with close links to USA, Canadian and UK health partners. We have to plan and operate very efficiently, being some 1100 kilometres from the closest mainland (USA).  The insurance-based healthcare system is of a very good standard with Accreditation Canada status, although some patients are transferred off island to access treatment not available in Bermuda.

The Bermuda Hospitals Board is in the process of constructing a new, acute hospital wing scheduled to open in 2014. Since arriving here I have been involved in a range of projects, from developing the specifications for the new facility, revamping the hospital signage, ward refurbishments and trialling new ways of working in all clinical specialties.

Living and working in Bermuda is definitely a unique and satisfying experience. It is a sub-tropical island of 55 square kilometres, situated in the North Atlantic Ocean. Its picturesque lush landscape is complemented by beautifully bright turquoise waters and pink sand. The island is also renowned for water sports and sailing.

First discovered by the Spanish in 1505 but only settled in 1609, Bermuda has since become a British Overseas Territory with a multicultural blend of residents, largely of English, Portuguese and Caribbean origin.

The island is quite isolated and being of volcanic composition, produces little raw materials, meaning most produce and goods are imported. This makes for interesting times during the six-month hurricane season when the island can be cut off for days and even weeks.

The population is around 65,000 people and it is quite affluent, with our capital centre in Hamilton and regional villages and historic townships across the island. Although somewhat confined, there are great shops, restaurants and an abundance of activities and community events.

The proximity to the north east American seaboard affords the opportunity to easily travel to those destinations, including New York, to participate in University of Adelaide alumni events.”

This entry was posted in Globe trotters, Health Sciences. Bookmark the permalink.