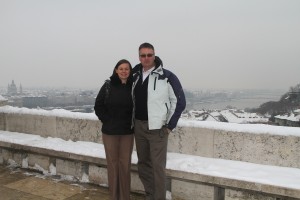 David Williams and his wife Maria in Budapest

Law and Economics graduate David Williams moved to Budapest in May 2011 after accepting a partnership with PricewaterhouseCoopers. David has responsibility for taxation affairs and business transformation across a wide tract of Europe as well as the Middle East and Africa.

This is his story:

“My family and I moved to Budapest in late May 2011. Primarily I look after the compliance outsourcing specialist business in Hungary with oversight of some neighbouring Eastern European businesses in Croatia, Slovakia, Slovenia and Czech Republic. I am responsible for Central and Eastern Europe tax technology and Europe, Middle East and Africa business transformation.

Central and Eastern Europe is a wonderful part of the world and Budapest is a city with an amazing history. There’s so much to see and do in and around the city and close to other wonderful countries and cities.

We have spent the last two Christmas seasons in Budapest. The Christmas markets are famous and we chose to spend Christmas day at the Intercontinental hotel on the Danube both years. We do not tire of the views on either the Buda or the Pest side of the river, walking across the beautiful bridges, walking around Margit Island, soaking up thermal spas visiting the numerous wine regions which are (almost) as good as those of South Australia and improving. (Budapest was once two cities – Buda and Pest – and it was also the outer frontier of the Roman Empire, occupied by various countries most notably the Ottermans of Turkey, the Hapsburgs of Austria and of course the Russians).

A few things about Hungary: The public transport is old but reliable and being renewed. The healthcare standard is excellent yet life expectancy is relatively low. It is also very well known for producing dentists!

Shopping for food here is like hunting and gathering. You need to experience the markets (just like Adelaide) as the fresh and varied produce is worth the extra effort. That said, outside the supermarkets, fruit and veg is seasonal. So people still make jams, pickles and various other preserves and, if there is leftover fruit, it makes the local rocket fuel – Palinka (a traditional fruit brandy).

The Australian community here is relatively small but then it is a small country. Some of us gather once a month at a designated watering hole and we are usually joined by the Australian Ambassador and other embassy staff.

We have met wonderful and interesting people along the way. Some come and go. Some have been here long enough to learn the language – now that is an intellectual challenge, but we are persisting!

There are aspects of living in Hungary that remind me of South Australia – the hot, dry summers, the flat terrain, the wonderful wines and great food. We have no immediate plans to return but we do plan on having our children high schooled in Adelaide and hopefully they will have the opportunity to study at our much loved University of Adelaide.”

This entry was posted in Globe trotters, Professions. Bookmark the permalink.