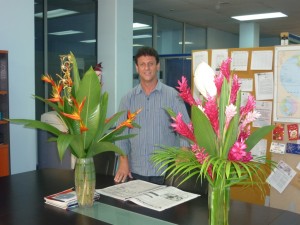 Life passes by in “Pacific time” for Vanuatu resident and law graduate Carmine Piantedosi, who has spent the past five years ensuring the island’s residents are paying a fair price for their electricity and water.

The qualified electrical engineer who completed a law degree at the University of Adelaide in 2000, moved to the subtropical archipelago in 2008 to set up the Utilities Regulatory Authority (URA).

This is his story:

“I was working in Victoria in the energy sector when I was given the opportunity to establish a regulator to review energy tariffs in Vanuatu and ensure reliable, safe and affordable services were being provided to residents.

In 2008 I started establishing the URA and my work focused on hiring staff and prioritising the tasks with the Government of Vanuatu. We reviewed the electricity tariff and lowered it after an extensive consultation. We also developed safety and reliability standards for the utilities and had to deal with legislative and regulatory issues, compliance matters and consumer protection.

My background in law proved invaluable during the arbitration process.

Building capacity has been an important factor. We make sure local staffs attend relevant trainings, but we are also actively engaged in the East-Asia and Pacific Infrastructure Regulation Forum (EAPIRF) and World Regulators Forum, where knowledge sharing, training and development economic regulation in emerging economies is enhanced and supported.

On a daily basis I deal with political, cultural, and policy issues in a country that has only been independent since 1980. We face many challenges in implementing regulatory and energy reform in a small island country and part of my role is educating stakeholders, including government officials and utilities, on regulatory compliance.

We have also launched a Public Education Program to inform the public on their rights and responsibilities, and help them understand their energy accounts and consumption.

Vanuatu is an archipelago of about 82 islands, some 1800 kilometres east of northern Queensland between New Caledonia and Fiji.

The climate is subtropical, with the temperature ranging from 20 to 32 degrees – perfect paradise weather for tourists and inhabitants alike.

About 245,000 people live in Vanuatu, spread across 60 islands. The national language is Bislama, although English and French are also spoken, reflecting its rich historical culture.

Wealth is measured in different ways. Pigs – particularly those with rounded tusks – are considered a symbol of wealth, and in the south, a system involving grants of title with associated privileges has developed.

Traditional music still thrives in Vanuatu, consisting mostly of drums, slit gongs and rattles, and string band music is also popular – an experience everyone receives when entering the country at the airport.

The Vanuatu people have a worldwide reputation for their friendliness and frequently appear in the top countries rated by the Happy Planet Index (the leading global indicator of sustainable wellbeing).

It is no wonder Vanuatu’s official title is “the happiest place on earth”!

This entry was posted in Globe trotters, Professions. Bookmark the permalink.