The sky’s no limit for Ashley 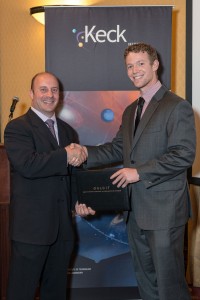 The program, with support from NASA’s Jet Propulsion Laboratory, brought together 30 students from various backgrounds and nationalities to participate in a space mission design collaboration.

This year’s challenge was focused on designing a manned mission to a Martian moon and featured participants from acclaimed institutes around the world.

A few weeks before leaving for California, Ashley and the other participants were asked to ‘get to know each other’ via email.

“I started reading their emails and they were all third and fourth year PhD students, interned at NASA or JPL, CERN, Purdue and MIT,” said Ashley.

“I was sitting in my little office in Adelaide, only four weeks into my PhD and thought, ‘ok, how I do this?’ It was very daunting.

“I didn’t know if I would even be able to even compete on the same level as these guys or operate with the same kind of knowledge.”

As it turns out, Ashley – the second youngest participant in the challenge – was not only a valuable member of his team but went on to assume a leadership position and took responsibility for several fields within the mission.

Thrilled with the win, Ashley and his team were further honoured when they were presented with their awards by Garret Reisman, former International Space Station astronaut and now senior engineer at Space Exploration Technologies (SpaceX).

“Garret said ‘I’m here to award you but I’m also here to steal you because we’ve got a lot of work to do’ and he proceeded to hand out his business cards!” Ashley said.

“You hear about SpaceX in the news but actually being there and making contact with them was something else.”

Ashley was also lucky to rub shoulders with legendary astronaut, Buzz Aldrin, when he was seated next to him at the gala dinner.

Making valuable connections was a fortunate by-product of Ashley’s involvement with the Caltech Space Challenge – he now has friends around the world, including a German student who is commencing his PhD in Stuttgart at the same institute where Ashley will be studying from October this year.

Ashley will spend two years at the Instituts für Raumfahrtsysteme (IRS) in Stuttgart, working on research into plasma propulsion, his area of PhD specialisation.

“My work will be looking at different fuels that can be used for propulsion systems, what can be extracted from the life support system – things that would automatically be ejected – that could be used as fuel,” says Ashley.

Ashley attributes his studies in Mechanical and Aerospace Engineering at the University of Adelaide to the niche expertise he has gained and which is now taking him around the world.

“The biggest thing my degree taught me is how to address problems – that’s really what an engineer does, you look at what the problem is, you break it down into manageable sizes and you prioritize those and create a hierarchy.

“Once you’ve learned those skills, you start to be able to apply them to professions that aren’t your own, for example, looking into aspects of medicine or building or architecture – you start to see the logic and how it flows through different designs and different disciplines.”

Ashley has already achieved more than most others his age and his involvement with the space industry will undoubtedly lead to great things, especially given that he and other young researchers are considered ‘the future of manned space missions.’

“In my mind, no-one does their PhD because they want to be on the sidelines. When the time comes, I’ll definitely be applying to the exploration mission programs,” says Ashley.

“I really want to contribute, to have the opportunity to do something no one else has done before – that sense of achievement, of mystery, that’s what motivates me to get up and go to uni every day.”

This entry was posted in Alumni Profiles, Engineering, Maths and Computer Science and tagged aerospace, caltech. Bookmark the permalink.