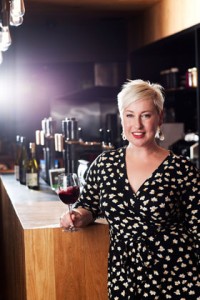 A “fan of all things fermented”, Yvonne also shares her passion for wine off-screen: in her weekly wine column syndicated through nine newspapers, as wine editor for Dish magazine, host of a radio wine segment and on the national wine judging circuit. She’s also a highly sought after public speaker.

Reflecting upon her time as a mature-age Wine Marketing student, Yvonne credits her success to the education, support and inspiration she received throughout her studies at the University of Adelaide.

I graduated with a Diploma in Wine Marketing in December 2002 after 4 years of external study. This advanced diploma is one of the worlds most sought-after wine industry qualifications and is made up of 50% Viticulture & Oenology papers with the remaining 50% being International Wine Business, Export Marketing, Consumer behaviour, Management & Legal papers.

Details of any scholarships and/or awards received

I was awarded the Bank Of South Australia Gold Medal for Most Distinguished Student, having gained the highest aggregate marks across all students, internal and external.

I was also awarded the Tucker Seabrook Award for Excellence in Wine Marketing.

What were some of the highlights during your time at University?

My experiences were slightly different in that I was studying externally (from my home in Hawke’s Bay, New Zealand). Somehow I also had two babies during the 4 years that I was studying and working, so ‘student’ life for me was pretty intense. But I always looked forward to, and loved, loved, loved travelling across the ditch to attend the week-long residential schools.

The camaraderie amongst our odds-and-sods group of external students was just fantastic. Most of us were also working in various aspects of the wine or hospitality industry and we’d always organise road trips and wine tours out to McLaren Vale or the Barossa after lectures had finished. I remember queuing every night with other students outside Ying Chow because we couldn’t bear to eat anywhere else. The café and bar at Waite was where I was introduced to copious amounts of Coopers, and Boags – I love that beer!

I remember watching one of my lecturers, an effusive, ebullient guy with foppish hair, an encyclopaedic knowledge of wine and a huge, toothy grin and thinking “that guy should be a wine rock star”. A couple of years later I saw him at a swanky tasting I’d been invited to – an audience with Peter Gago, Custodian of Penfold’s Grange.

Once I had to bring my 3 month old son with me to a residential school, and recall getting a tap on the shoulder during an important sensory examination to hear, “just thought you should know, they’ve had to evacuate the childcare centre, but everything’s OK, they’ve found the snake”.  Needless to say, for a kiwi that’s quite disturbing news, hardly what I needed to hear during a test! Oh well, I passed!

Why did you choose University of Adelaide to study?

Back in 1998 when I typed ‘wine marketing’ into Netscape Navigator – only three things came up: UC Davis, the University of Bordeaux and Roseworthy College/University of Adelaide. I immediately recognised Roseworthy as being the breeding ground of a huge amount of wine making talent, people that were doing great things in our industry, people I looked up to, admired and aspired to work with.

I think also the ANZAC thing kicked in and I thought if I’m going to launch into years of debt to get this awesome qualification, then I want my dollar going to the Aussies. The course booklets, reading material and textbooks were world class and as soon as I began my first semester I knew I’d made the right choice.

They were just incredible, such great communicators and passionate people that were (and still are) hugely respected as industry professionals in their own right. Studying from New Zealand, whenever I had a question regarding any aspect of the course work, no matter how small, the individual lecturers answered emails and returned phone calls with speed and attention. Even though I was distance-learning, I still felt very much part of the campus, part of the team, and it made me look forward to residential schools all the more.

Tell us about about your journey from University to where you are now?

Back in the 1990’s there were a couple of TV programmes which incorporated wine and I really loved watching them – but sadly they disappeared from screen all too quickly. While I was studying I managed to convince a local supermarket owner to hire me to reinvigorate their (already large) wine department, and set up a customer loyalty scheme, or wine club – the first of it’s type in New Zealand. So I was working as their wine consultant (buying, working the floor, operating the wine club, arranging instore tastings etc) for a year or so before I graduated.

When news of my graduation achievements got out, that’s when local wineries also began approaching me to assist them with marketing projects, which led to some really interesting work.

The segue into wine writing began one day when I was working at the supermarket. I was helping the editor of a local suburban newspaper to choose some wine and I asked, “what happened to your wine column? I haven’t seen it in ages”, and he replied that the wine writer wanted to charge him more money than he could afford, so he’d had to let the column slide. So I said, “well do you reckon I could have a go? Don’t worry about paying me for a few weeks; just see if you like it and if the readers think its ok then maybe somewhere down the track we can work something out”.

A larger local newspaper then approached me to write for them and then it just sort of steam rolled from there, so now I have a weekly wine column which is syndicated out to over 9 newspapers and I’ve been the wine writer for Dish Magazine since 2010. I do regular radio spots and I’ve been a senior wine show judge now for around 6 years.

I decided to pursue judging because I felt it was all very well me telling my readers what wines I liked – but what if my palate wasn’t actually up to scratch? Judging really lays your skills and weaknesses bare, and I always learn so much from every competition I do.

Back in 2010 I scraped enough cash together to film a pilot for a wine show idea that I’d been brewing for the best part of a decade. Fortunately the Food TV network liked it and Thirsty Work was born. FoodTV is now broadcasting Series 2 and I now I need to knuckle down and start working on a possible third series.

Apart from your academic qualifications, how do you think your experience at the University of Adelaide has helped shape you as a person and your career?

My time studying at the University taught me that no matter what stage in life you’re at, no matter what your personal and financial circumstances are, it is never too late to change direction, to learn new things.

I was in my mid 20’s, freshly redundant from a career in the music television industry, my ego had taken a hammering and I had to move home to live with my parents. Add an un-planned pregnancy to the mix and you’ve got an excellent excuse for a good long sulk. But once I made that call and filled out those enrolment papers, everything changed. The support I received from Adelaide University made me feel like I really could achieve anything.

What do you enjoy most about your current work and life?

I enjoy that it feels like all those years of study, groundwork and long hours are starting to pay off. I feel really proud when people ask me what I do for a living, to say I’m a wine writer – and they go “wow! What a cool job!”

I enjoy that I’m in a position to help create new shifts in attitude toward the way we consume alcohol, and that wine is something to be enjoyed in moderation with good food and good friends. That it’s not just ‘booze’ and that we have an opportunity to change our drinking culture through education and appreciation.

Your advice to incoming students to gain the most from their time at university?

Just be confident with the choice you’ve made by being at Adelaide Uni. I’ve met so many people from across the globe who have heard of the University’s reputation and there’s huge respect out there in the world for the calibre of its graduates.

The University of Adelaide spared no expense or effort with providing me with the resources I needed to excel in my chosen field – so I almost felt like I didn’t want to let the university down by not using my qualification for everything it’s worth.

And looking back on my time studying, the stress of juggling life as a mature student and then where I’ve managed to land all these years later – my motto is now firmly “Bite off more than you can chew – then chew like hell”. It pays off.