Posted on September 17, 2013 by Genevieve Sanchez 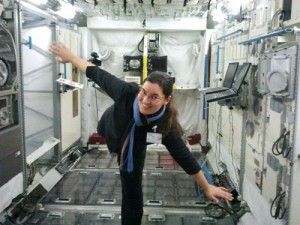 Andrea inside Columbus at the European Astronaut Centre

Mechatronic Engineering graduate, Andrea Boyd is part of a team in Belgium that rotated the entire International Space Station for science objectives.

Driven by a desire to ‘understand the entire world’, 29-year-old Andrea has travelled, worked and studied in 50 countries across six continents and is currently helping to write the Space Mining roadmap – combining her two worlds of mining engineering and space.

Details of any scholarships received/awarded
Women in Engineering Protégé, 2006.

How have these scholarships/awards helped you achieve your goals?
In Korea, I learnt how to live in Asia (I had already lived in Europe and Russia and US/Canada and travelled a lot to SE Asia) and now have this skill which is huge for the upcoming Asia Century.

I picked up decent Korean language skills and naturally progressed to being a cultural interface – something I was able to use while organising part of the biggest international space conference in the world held in Daejeon in 2009.

What were the best parts of your time at the University of Adelaide?
My classmates (still close friends and sometimes colleagues), the O-week building challenges in Mechanical Engineering (a trebuchet to launch water balloons at a lecturer ‘target’ was my favourite), the Final Year Project (even though it took over our lives for a whole year!) where we designed from scratch, manufactured and launched a supersonic ramjet from Woomera.

Did you take part in any extra-curricular activities?
I was a member of the Aerospace Club, AIAA and was on the Executive Committee from 2004-2008. We took part in paper competitions, excursions, Yuri’s night space parties, public events and careers nights.  The credibility it gives when interacting with senior professionals in the industry is invaluable and ended up being behind the success of our Ramjet project, with one of the parent AIAA members funding as major sponsor.

For fun I played basketball for the Adelaide University Griffins, joined the Evangelical Students group and the Maths Society, took part in Engineering Pub Crawls and sometimes tagged along to try out my friends’ clubs like Film, Gliding, and SCUBA Diving. I helped with the International Student Society and later also the United Nations’ Space Generation Advisory Council, a global student network from 70+ countries. In 2008 I represented Kyrgyzstan on UNESCO at the Asia Pacific Model UN Conference.

Name some career highlights
Working in Australia’s biggest underground mine and commuting to work by plane as a FIFO. I genuinely loved all of it – the flying, the hands on engineering, extreme environments – everything.

Moving the entire ISS for our payload in Belgium to ‘SOLAR attitude’ – twice!

Being invited as the only person under the age of 50 to take part on two IAA Study Groups – one in particular for Space Mineral Resources combines my two worlds of mining engineering and space.

Apart from your academic qualification, how did your experience at the University of Adelaide shape you as a person?
Independence and being responsible for my own work without reminders, plus exposure to so many ideas and for me it was also a buzz to attend the same university that Andy Thomas did.

Most of all it was the other people I was able to learn from and become friends with outside of class. I met people who I aspired to be, like Dr Kimberley Clayfield who was finishing her PhD when I started first year.  She went on to have an amazing career and is currently the Executive Manager of Space Sciences and Technology within Australia’s national research organisation, CSIRO. Awesome people go to Adelaide Uni and it’s people that make the place.

What was your part in co-founding Aerospace Futures?
I saw a flyer during first year for a conference called Space Futures in Melbourne and decided to send myself along – it was incredible and I’m still friends with and working with many of the people from there who are big players in the Australian space world now.

Many years later Stuart Kearny (now a Silicon Valley entrepreneur) was in contact with me about a revamped Space Futures and together we made that happen in 2010. I assisted in subsequent years with speakers from my network and am very proud of the AYAA team that runs it now. This is now an annual conference, recently hosted this year in Adelaide, and it also provides scholarships for Australian students to attend the biggest space conference in the world.

Do you have any advice to incoming students to gain the most from their time at university?
The first two years may seem disjointed and not useful, but in third year you’ll do courses which suddenly use ALL of it – don’t discount the early courses– they matter.

Take a gap year before study and work and see the world or do both by taking a university exchange. Overseas study is always advantageous – do it!

Sign up to some fun things and take advantage of being able to try activities as student prices – those kinds of chances won’t happen again!

And any tips for new graduates on choosing their employment path?
Do lots of work experience – more than the required amount – use each summer for this.

Make yourself employable – everyone has a degree – what else do you have that can’t be taught? Another language, initiative, attention to detail, professionalism around senior personnel, coping under pressure, teamwork; life skills are considered equally with academics.

Find others who are working where you want to be and seek out a mentor program – find out how those people arrived at where they wanted to be – there is not a unique path.

A mentoring program is a fantastic way to learn life skills from senior people who have been there and done that. My mentor also criticised and revamped my CV and blasted my mental rigidity of career Plan A only. I remember him saying, ‘No. That’s not the only solution. That’s your Plan A. Come back next week with Plan B’s, Plan C’s and Plan D’s’.

What are your future career ambitions, what drives you?
I’m driven by wanting to understand the entire world. I want to know how things work, why they work and how to make them work better.

I love to spend time like a local experiencing different countries, picking up languages and have never been a tourist, since my first international experience at age 15 as a high school exchange student to Italy, I’ve been visiting friends and picking up languages, with world skills gained through work and study adventures in some 50 countries across six continents. I’m still missing Antarctica, but it’s on my todo list!

In the space world I am enjoying my time contributing to the International Space Station and will soon take up co-Increment Lead for Belgium for Inc37/38 (increment = the time a three person crew is on the station, up until their spacecraft undocks to return to Earth).

I’m still in awe at the privilege of helping write the Space Mining roadmap, with sights to combine my professional engineering experiences to actually make that a future industry and involve Australia in a big way.

And if all else fails, I’d be very happy to at least once play basketball in space!

This entry was posted in Alumni Profiles, Engineering, Maths and Computer Science and tagged aerospace, ISS. Bookmark the permalink.