Laura Clemow’s passion for all things German has aided her in making SA home after relocating from interstate to study at the University of Adelaide. 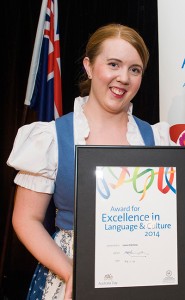 The Bachelor of Arts and German studies Honours graduate chose the University of Adelaide for “the opportunity to be able to study German at university level.”

“I was also attracted to the vibrant social culture on campus, especially the student clubs and societies,” Laura said.

And it was these social interactions that helped Laura form so many new friendships in South Australia, most of which she owes to the Adelaide University German Club.

“This is something I now recommend to all new students, as it’s a great way to meet people who share common interests. I was the First Year Representative on the Committee in 2008, became President in 2009 and 2010, and served as Secretary in 2011.

“It was through the German Club that I was able to meet fellow students from all disciplines and develop practical skills in event management and administration,” Laura said.

“Through my academic pursuits, I was able to develop my problem solving, critical thinking and research skills, and greatly broadened my understanding and appreciation of other people’s points of view.  Being a student at the University of Adelaide really made me feel “at home” in South Australia.”

Laura’s dedication to German culture, including her involvement with the Bund der Bayern Bavarian dance group, was recently recognised when she was awarded the 2014 Minister for Education’s Award for Excellence in Languages and Cultures presented by the Australia Day Council of SA.

The award recognises young Australians who have shown commitment to advocating for a multicultural Australia with competence in more than one language and outstanding leadership qualities.

‘It was a great honour to win this award, but I also feel a little bit humbled by it because I am just out there doing things that I enjoy and sharing my love of all things German – it doesn’t feel like work at all,’ Laura said.

‘Winning this award has also inspired me to continue to pursue my interest in German – I would love to become a German teacher one day, and I did actually enrol in the Graduate Certificate of Education course before deciding at the eleventh hour to pursue Honours instead, so perhaps a return to the University of Adelaide is on the cards within the next few years!’

This entry was posted in Alumni Profiles, Humanities and Social Sciences, News. Bookmark the permalink.