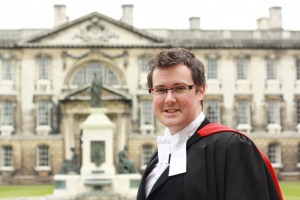 Dr Mark Ainslie has amassed a multitude of prestigious awards and titles since graduating from the University of Adelaide in 2004, adding to an impressive list gained during his undergraduate studies here. He was awarded a Royal Academy of Engineering Research Fellowship in 2012 – a five-year, fully-funded research program that sees him researching (in broad terms) superconducting electric machine design. He is based in the Bulk Superconductivity Group in the Department of Engineering at the University of Cambridge where he carried out his PhD research.

University of Adelaide degree details, including year of graduation and subsequent qualifications:

Details of  scholarships or prizes awarded at the University of Adelaide:

What have you been doing since graduation?

After graduating from the University of Adelaide in 2004, I was awarded a prestigious Japanese government Monbukagakusho (Ministry of Education, Culture, Sport, Science and Technology) scholarship at the University of Tokyo, Japan.

I advised a large collaborative research group on the electrical design of a high temperature superconductor thin film-based superconducting fault current limiter and delivered a number of technical presentations in Japanese. I was awarded an Outstanding Research Presentation Award at the Institute of Electrical Engineers of Japan’s Annual Conference in 2008 and graduated with a Master of Engineering degree in 2008.

In 2009, I was awarded the Cambridge Australia Trust’s R A Fisher Scholarship in Science, in addition to an Overseas Research Student (ORS) Award, to pursue a PhD in the Engineering Department of the University of Cambridge. During my PhD, I developed numerical models to calculate the electromagnetic properties of superconducting coils and designed an electrical measurement technique to measure these properties experimentally.

In 2011, I was awarded the European Society for Applied Superconductivity (ESAS) Young Researcher’s Award in the field of Large Scale Applications for a presentation at the Superconductivity Centennial Conference in The Hague, Netherlands. Over 1,100 delegates attended this conference and it was particularly high profile as it commemorated the 100th anniversary of the discovery of superconductivity.

In 2010, I received the John Rose Prize from King’s College for an essay “Warming up to superconductivity,” for describing a difficult scientific principle to general readers, and in 2012, I was awarded 1st Prize in the category of Engineering & Physical Sciences at the inaugural 2012 Association of British Turkish Academics (ABTA) Doctoral Researcher Awards, which are aimed to “promote and award academic and scientific excellence among young researchers pursuing doctoral degrees in the UK.”

What are you working on now?

I am now developing my own team of future researchers in the Bulk Superconductivity Group, where I am currently a Royal Academy of Engineering Research Fellow and Principal Investigator of a research programme worth over £0.5 million to investigate various aspects of superconducting machine design utilising both wire and bulk forms of high temperature superconducting (HTS) materials.

This involves fundamental research to overcome some of the technical challenges associated with these superconductors, including investigating techniques to reduce AC loss in superconducting coils and simplifying the magnetisation of bulk superconductors. This will culminate in the development of a prototype highly efficient and more power-dense superconducting electric machine.

In addition to this Fellowship, in 2012, I was elected a Junior Research Fellow at King’s College, Cambridge.

Most recently I was awarded a two-year Royal Society International Exchange Scheme grant to work with Professor Hiroyuki Fujishiro at Iwate University, Japan, on the flux dynamics of bulk superconductors for pulsed field magnetisation.

What have you enjoyed most about your time in the UK?

Definitely not the three Ashes series losses since arriving here in 2009!

The Department of Engineering is the largest department in the University of Cambridge and constitutes about 10% of the University. It has an outstanding international reputation for both research and teaching and attracts the best students, academics, sponsors and partners from around the world.

The environment in Cambridge is challenging, but has pushed me beyond what I thought I could ever achieve. Being surrounded by progressive and brilliant big thinkers has improved my life and career immeasurably. I’ve had the chance to immerse myself in another culture – one so similar to my own Australian culture, yet so different, with many intricate historical ties between the two countries.

There is also plenty of cricket and I have enjoyed captaining the Engineering department cricket team over the past few years.

What were the best parts of your degree at the University of Adelaide?

The specialist Engineering courses and the flexibility to do additional degrees at the same time with some overlap. The encouragement and support of the lecturers in the Department pushed me to reach heights beyond anything I could have ever imagined.

What were your lecturers and tutors at the University of Adelaide like?

My lecturers were passionate and enthusiastic about their subjects and provided the necessary encouragement and support to understand the technical concepts they taught. I still keep in touch with a number of my lecturers in the Department, who have been extremely supportive of my achievements and I always pop in to say hello when I come back to visit Adelaide.

Apart from your academic qualification, how did your experience at the University of Adelaide shape you as a person?

The environment encouraged me to pursue my interests and achieve excellence in whatever I do. The University provided me with a strong academic foundation that has assisted me in my success in my career so far. Through the support and encouragement of the academic staff, I have been highly motivated to reach my true potential.

Forming excellent study habits early on is a must, especially since university teaching is different to that you would have experienced at high school. The transferable skills you learn during your undergraduate studies are also important for your future career and life.

Having an extra-curricular activity or two to let your mind rest and relax is also critical to performing at your best. Work hard, but celebrate your successes when they happen with something fun.

Do you have any tips for finding work after graduation

The preparation for life after graduation should start as soon as possible, and be proactive – you are the master of your own destiny. I strongly believe that “luck is where opportunity meets preparation.”

Have an updated and polished CV ready at all times. Ask yourself how you stand out from and ahead of your competition. The more flexible you are, the more likely you are to find an opportunity, but you should never lower your own personal standards and always seek opportunities that allow you to do things that you enjoy.

Finally, I highly recommend joining at least one professional organisation related to your field while an undergraduate and take advantage of their usually highly subsidised membership fees, interesting talks or tours, and mentoring schemes to assist with your career planning and progression. Talk to people in these networks, talk to your University’s research office and/or careers service, ask your lecturers and tutors for advice.