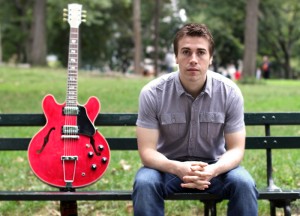 In a major coup for the University’s Elder Conservatorium of Music, a dissertation by one of its most gifted PhD performance candidates, Quentin Angus (BMus (Hons) 2008), has been recognised by one of the world’s leading authorities on jazz, the prestigious Downbeat magazine.

Quentin’s standing in the jazz guitar world is such that his dissertation included duet performances with two of jazz’s guitar’s most admired and respected artists, John Abercrombie and Gilad Hekselman.

In addition, Quentin’s touring band (which also includes another Elder Conservatorium graduate and Downbeat Award winner, pianist Matt Sheens) was featured to great acclaim at the International Jazz Festival in Holland in 2013.

Thousands of submissions from around the world are received by Downbeat magazine each year and the Elder Conservatorium is the only Australian institution to have received any student awards in 2013 (Jazz student Lauren Henderson’s award of ‘Outstanding Performance for a Jazz Vocal Jazz Soloist’) and 2014.

Now resident in New York, where his star is very much in the ascendant, Quentin says he is honoured to have received the awards, and thrilled that the Elder Conservatorium’s postgraduate program has received the recognition it deserves.

“My experience at the University of Adelaide shaped me both as an artist, and also as a person,” says Quentin.

“I started studying there in a Certificate IV program at the age of 16, and finished 10 years later with a PhD. In a lot of ways my most important years were spent at the Conservatorium – I kind of ‘grew up’ there.

“This progression allowed for the absorption of fundamentals, general knowledge and standard jazz education to equip me for the future. Completing postgraduate studies offered me the opportunity to focus on exactly what I wanted to do – my niche – and really go for it. It has provided a kickstart into my career, and I’m excited to continue on this path.”

Quentin’s awards are the latest in a long history of national and international excellence achieved by Elder Conservatorium students and staff in music performance, composition and scholarship.

Find out more about the Elder Conservatorium of Music.

This entry was posted in Humanities and Social Sciences, News and tagged downbeat award, elder conservatorium, jazz. Bookmark the permalink.