Posted on January 29, 2015 by Genevieve Sanchez 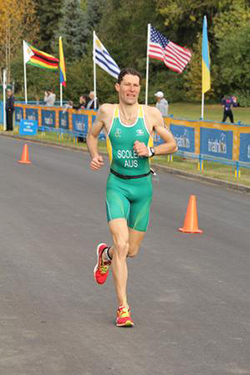 After a near-fatal bicycle accident in 2007 Tony Scoleri defied the odds by graduating with a PhD in maths and computer science in 2008 and also recovering his career as a triathlete.

Now a visiting research fellow in the Faculty of Health Sciences, Tony competes with a right arm disability and has won several national titles and recently qualified for the 2015 World Duathlon Championships which will be held in Adelaide by the River Torrens.

Tony’s new goal is to qualify for the Paralympic Games in Rio de Janeiro in 2016.

Originally from New Caledonia, Tony moved to Australia to study at the University. While an undergraduate, he received a financial boost when he was awarded the Bill Scammell sports scholarship which helped him to travel to interstate races.

Graduating with a Bachelor of Science (Honours) in 2002, Tony went on to undertake his PhD while also training for up to 30 hours a week, and had developed into a top national athlete.

In the weeks preceding the accident Tony was concluding a challenging research topic, had secured a job with the Defence Science and Technology Organisation (DSTO) and was considering competing in triathlon internationally. All that he had worked toward for years was lost in a split second when a car door hit him in the neck while he was riding his bike.

Tony spent several weeks in hospital in intensive care and then underwent years of daily physiotherapy, massage and consultation with medical specialists and psychologists.

Having sustained a brain injury, Tony also had to retrain himself mentally. However, within four months of the accident, Tony started his job with the DSTO on a part-time basis and then resumed his PhD at the end of 2007. But the physical and mental rehabilitation continued for many years.

“I was confined to a gym room in my parents’ house exercising my arm to recuperate anything I could. Pain was constant and in various forms – pins and needles, numbness, compression, electric shocks, stiffness, nausea, dizziness. I have a long list of chronic symptoms I experience even now.”

In 2013 Tony attempted running and started to slowly build up his fitness. Overcoming his fear of being back on the road he got back into riding and then swimming and went on to be selected in the Australian paratriathlon team for the 2014 World Championships in Edmonton, Canada where he came fourth in the open category.

Having recently gained the support of a sponsor (Pure Sports Hydration) and currently placed at 16 out of 91 in the world in paratriathlon rankings, Tony is feeling confident about qualifying for the Paralympic Games. He is also enjoying a continuing relationship with the University through his work as a research fellow, supervising a PhD student in the Biological Anthropology and Comparative Anatomy Research Unit (BACARU) in the School of Medical Sciences.

“Following the accident, coming back to sport was something no one had ever imagined I could do, not even myself!” says Tony.

“Now I have the immense satisfaction of having competed and represented Australia at a world championship – this was a dream come true and something unthinkable given my circumstances.”

This entry was posted in Alumni Profiles, Engineering, Maths and Computer Science. Bookmark the permalink.