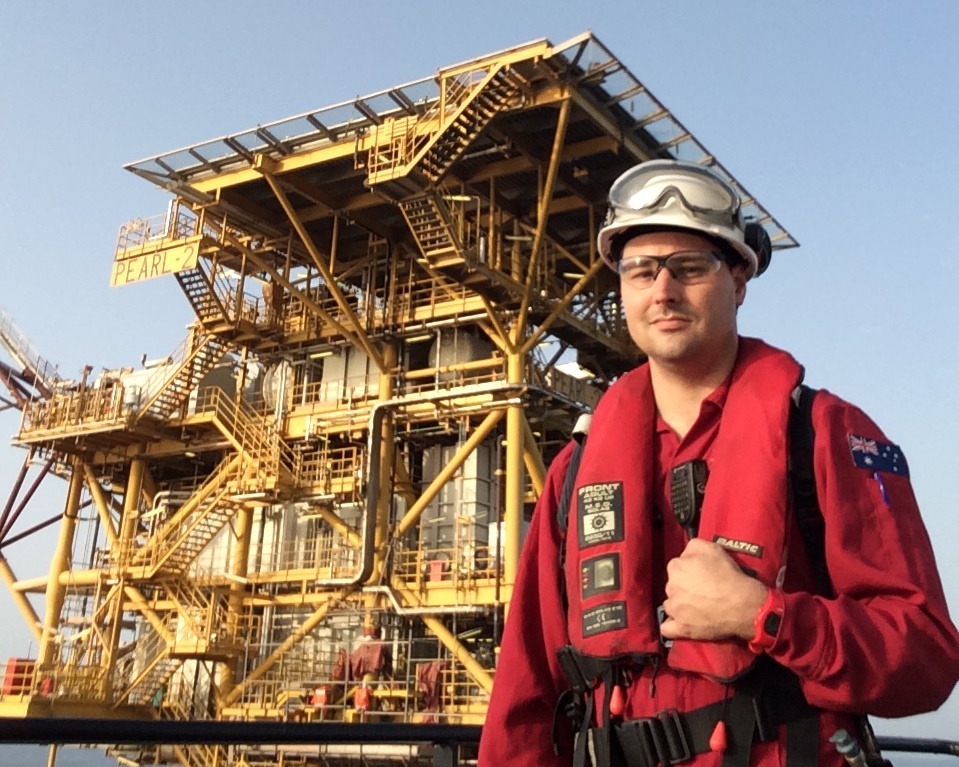 Jonathan Koch wrote to the University from his ‘office’ at sea on a Shell production platform – sitting in on-site command of drilling related operations, just outside of the Iranian sea border. The gas wells under his supervision produce a sizeable contribution to Shell’s global revenue.

Since graduating with first class Honours in Mechanical Engineering in 2005, Jonathan has worked in Australia and overseas in the oil and gas industry as a drilling engineer.

“Working as an engineer is rewarding in itself however what has been most fascinating are the places being a drilling engineer can take you and the personal and career challenges it can throw at you if you’re willing to take them on,” says Jonathan.

“It’s fair to say the Shell Qatar North Field wells are a valuable asset to be given site responsibility for at age 34 and this is an exciting challenge,” he says of his current post.

“As a drilling engineer, the places we work can be some of the last unchartered and most inhospitable around and for those wishing they could be an explorer this is one of the last ways to be able to do it, on earth at least.”

Jonathan speculates that while the recent slump in the price of oil might have turned some prospective students away from a career in oil and gas, it is a very cyclic industry and this should not deter graduates from taking on what can be one of the most rewarding engineering roles, not just financially but for life experience.

“One day I can be working in the Hague in the Netherlands at Shell head office, the next on helicopter crash survival training followed by being dropped into the middle east desert or offshore – it is an interesting if not busy life,” he says.

In final year university Jonathan was ready to start an engineering PhD in the UK with an Australian Post Graduate Award scholarship, however he deferred for a year to earn an income after being offered a graduate drilling role initially with Santos in Adelaide and has never looked back.

In acknowledgement of the opportunities his degree opened up, Jonathan enjoys being able to give something back to his alma mater – making a yearly pilgrimage to Adelaide to be an industry judge at the School of Mechanical Engineering Level IV design project exhibition.

“It’s a yearly highlight for me to see what the students have come up with, discuss my own career experiences with them and catch up with academic staff and my peers,” he says.

“I could not have got to where I am in the world without the knowledge and quality of degree that I received from my time at the University of Adelaide.”

If you have news or updates to share with your fellow alumni, email alumni@adelaide.edu.au