Posted on December 1, 2017 by Kimberley Hoile 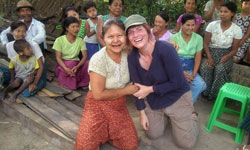 How did graduating with a Bachelor of Arts in 2002 lead Lara Damiani to an exclusive, sit down interview with the Dalai Lama?  After completing her degree Lara worked mostly as a freelance communications consultant. In 2006 she decided she wanted a career change, something that would feed her soul. That was the beginning of a wonderful, soul feeding journey!

We sat down with Lara to talk about her career journey to date.

Can you tell us about some of the projects with NGOs you have been working on here and overseas?
Lara: I’ve been doing some work for an Australian NGO called CUFA. They do really great work in communities in countries like Cambodia, Bougainville (PNG), Timor and Myanmar providing financial literacy training and village entrepreneurship programs as a way of helping people out of poverty. I’ve been making some evaluation videos for them which they use to show their stakeholders about the impact they’ve been having. This year, I’ve been in Cambodia, Bougainville, Myanmar and Timor working for them.

I’ve done some work for Relief International in Bangladesh. I was able to see a great project they’ve been running in the Sundarbans which is the world’s largest saltwater mangrove forest. The project was an eco-tourism initiative where local villagers could enter into new economic opportunities to run eco-tourism ventures. The aim of the project was to reduce the dependence on the natural resources and provide communities with new economies. In the Sundarbans, many men go into the forest to find honey which is dangerous because of the presence of Bengali tigers, in fact many women in that part of Bangladesh are known as ‘tiger widows’ because they have lost their husbands to tigers while hunting for honey in the forest.

Why has working with NGOs become a major focus for your film work?
Lara: I’ve always had an interest in international development so it seemed like a natural fit for me! I love being able to go into communities that most people would never have the opportunity to go into and to turn their stories into films.

How did you come to be working with fellow alum Dr James Muecke?
Lara: I read an article about Dr James Muecke and his organisation Sight For All in The Australian. I was so inspired by James and his work and I thought, wow, this guy is amazing and he’s from Adelaide so I sent him an email letting him know that if he needed film work, I’d be happy to help out. That email ended up in me travelling with James to Bangladesh and Vietnam in March 2016 where I really got to see what he does in developing countries. I’m inspired by his dedication and passion but also by his incredible ability to network and create the opportunities that a charity like Sight For All must have in order to be successful.

Can you tell us about what you saw and experienced during your trip with Dr James Muecke?
Lara: It was the first time I filmed in an operating theatre, let alone in a developing country! I filmed a 3 month old baby having her eye removed and that was the first time I’d ever filmed anything that serious. It was an emotional trip because the filming was not only this tiny baby having an eye removed, but I was filming her mother and her journey through the operation on her baby daughter.

What I learnt from the experience with James is the importance of screening and early detection. Sadly many of these young children often come from poor families with little or no access to health care. I saw the difference they make on the ground in places like Hanoi and Dhaka. I guess this is what drives me to do the work I do for NGO’s because I know how important their work is and I want to help them tell their stories.

Can you tell me more about your upcoming documentary in Vietnam?
Lara: This is a short film about a little girl from Northern Vietnam called Bang. I first met Bang at the Vietnam Institute of Ophthalmology when I was there with James in 2016. She was three and had her eye removed some months before, because of eye cancer. On that trip, I went to visit her family home in a tiny village in the mountains of Northern Vietnam in Yen Bai Province. It was an incredible experience. Their family home is very basic, it has a dirt floor and they don’t have much money but they opened their home and their hearts to me like I was one of their family. I went back this year to follow up and see how Bang is doing 15 months after our first meeting. She had a new artificial eye fitted which I got to film and I couldn’t help smiling because she was just so cute and nonchalant about it all.

The second part of my trip this year was to go and spend two days at Bang’s home. However the afternoon we drove into Mu Cang Chai heavy rains came down and continued on in the night. The next morning, we discovered flash floods had destroyed roads, some of the town infrastructure and had washed away some village homes, taking villagers’ lives. Fortunately, Bang and her family were safe but it meant there was no way to reach their home as the only way there is via a narrow dirt road on motorbike. Sadly, we had to drive back to Hanoi. Regardless of this, I’ll work on the film and hope to have it finished by the end of this year.

This entry was posted in Alumni Profiles, Humanities and Social Sciences. Bookmark the permalink.