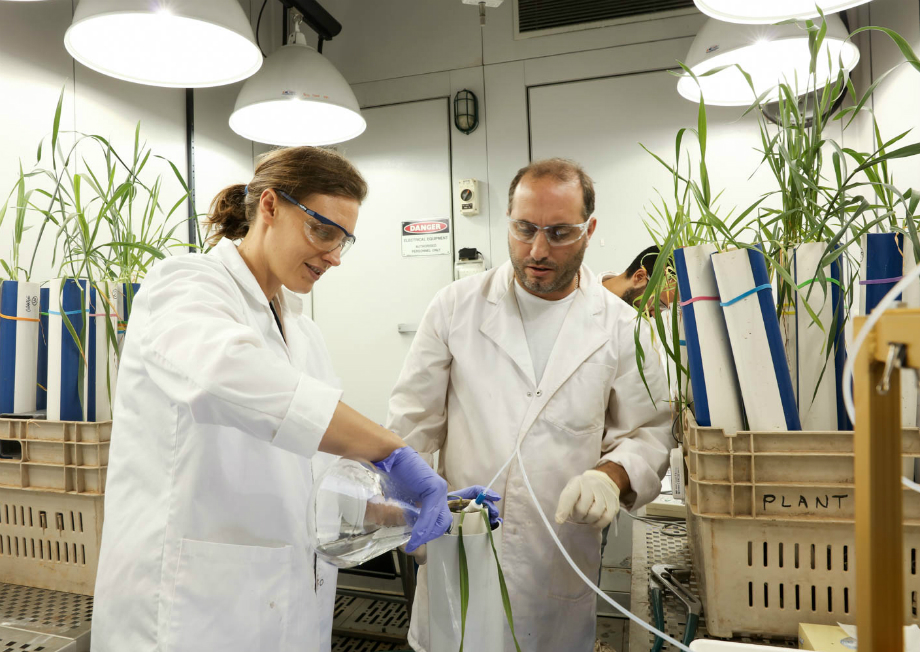 As a child, Caitlin Byrt dreamed of living as a hermit in the middle of nowhere, so she could be entirely in touch with nature. These days she uses her knowledge of nature to play a part in ensuring current and future generations have access to good quality fresh food.

An alumna and senior researcher in plant biology at the University of Adelaide, Caitlin studies processes in a plant’s biology to help determine how to boost crop productivity.

This began during her PhD studies, when she was part of a project team that identified a gene in wild varieties of wheat that contributes to the plant’s tolerance to salt.

“Water limitation and soil salinity are two of the major problems limiting crops’ yields,” she said.

“For us to feed our growing population we must develop crop varieties that remain productive in stressful conditions where water is relatively limited, and in areas where soils are affected by salinity.

“The project achieved a 25 per cent increase in durum wheat grain yield in saline soils, and the traits and genes were distributed to more than 18 countries.”

Caitlin has received several accolades for her work, including the University of Adelaide Edith Dornwell Medal for Early- Career Research Excellence (2014) and the Australian Research Council Discovery Early Career Researcher Award (2015). She also received an Australian Institute of Policy and Science SA Young Tall Poppy Award in 2015 and, most recently, an Australian Society of Plant Scientists Goldacre Award for 2018.

Last year she won a category of the Australian Government’s Science and Innovation Award for Young People in Agriculture, Fisheries and Forestry, which is helping to support a current project examining the wild relatives of barley crops to establish what makes them tolerant to stress.

“In this project we have identified strategies to figure out how we can resolve what genes and traits we need to borrow from these stress-tolerant plants and introduce into our favourite crop plants, like barley, so that they too can remain productive in these conditions,” she said.

As part of the project, Caitlin recently travelled to Scotland to work with a team at the James Hutton Institute. Together with this team and local Grains Research and Development Corporation funded researchers, they have identified a gene in barley that influences the amount of salt that accumulates in the seed and leaves in saline conditions.

Caitlin was drawn to studying the productivity of crop varieties under stressful conditions during her honours year when she met Professor Mark Tester, who now leads a world-renowned program of research focused on improving plant tolerance at King Abdullah University of Science and Technology in Saudi Arabia.

“Mark told me about his friend and colleague at the CSIRO, Dr Rana Munns, who had identified novel salt tolerance traits in wild relatives of wheat and was planning to figure out what genes were linked to those traits,” she said.

“He mentioned there was a PhD opportunity in this area, which sounded exciting to me.

“I grew up hearing in the news about the increasing salinity problems in the Murray River, so the chance to figure out how to protect crop plant yields against rising salinity was an opportunity not to be missed.”

After completing her PhD, Caitlin found there were lots of opportunities for work, but she chose one that would allow her to stay in the field she was most interested in advancing – plant science.

“I definitely wanted to continue to contribute to plant science because plant science holds the keys to solving major global challenges. Our food, raw material, medicinal and fresh water needs are all either directly derived from or intricately linked with plant industries,” she said.

Surprisingly, given her success to date, there was a time when Caitlin seriously considered a career outside research.

“Near the end of my undergraduate degree, I had a wonderful work experience opportunity. It involved learning about managing an almond orchard, such as watering regimes and plant health management. While doing this I had great fun flying around in a light aircraft, practicing shooting clay targets, swimming in the orchard swimming pool, and careening about on a quad bike.

“At the end of it, the company sent me a $1000 thank you cheque and offered me a position.

“I had to decide between this opportunity and continuing to study; in the end the thirst for new knowledge tipped me over to pursuing a higher research degree.

“That thirst is still there, I made the right decision.”