Barbara Kidman and Madeleine Ryan find the perfect place to pursue their passion for preserving history.

Unbelievably, at 91, Barbara Kidman is only the University of Adelaide’s third oldest volunteer.

She is part of the University Volunteer Program comprising more than 2,800 students, alumni, lecturers, friends, family and members of the public who provide nearly 70,000 hours of their time – the equivalent of $2.8 million worth of work each year.

Barbara’s relationship with the University goes back to the 1940s when she was the first and only female studying physics.

Her university volunteering career began when she supervised a computer science Masters student around the time of her retirement in 1987. Barbara now visits the North Terrace campus once a week to help out University Archives. 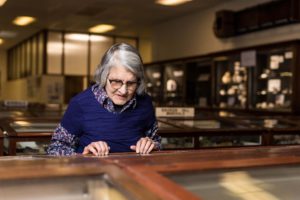 “I answered an advert from University Archives in the University’s paper about 15 years ago as it sounded interesting. I’m still there, and I will continue with it until I die,” she said.

From physics and computer science to archives might sound like a leap, but for Barbara the transition made sense.

Barbara helped establish the very first Science Chapter Alumni Group and later saw an opportunity to extend her university involvement by becoming a history tour guide, indulging another of her interests.

When University Archives set up a volunteer group to help with indexing and other projects, Barbara was happy to be one of the first to participate.

Barbara’s role is to index the University’s Council minutes, starting with the first Council Meeting in 1874. “I’m now up to 1908!” she said.

“As long as I am physically capable of doing volunteer work, I will,” said Barbara.

“The work and the people are interesting and I miss it when I’m not there. I think mainly because of my long association with the University, I find many aspects fascinating.” 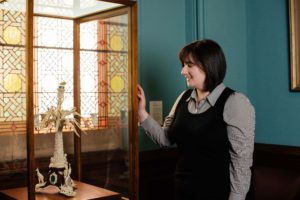 Barbara’s love of history is something she shares with one of the University’s youngest volunteers and self-confessed “history nerd,” Madeleine Ryan.

In her sixth year at the University and currently completing a Masters degree in Curatorial and Museum Studies, Madeleine was destined to volunteer for University Collections and relishes the opportunities it provides.

“Just recently I was asked to give a guided tour of the public art on the University grounds for Open Day. A few months ago, I accessioned works by Angela Valamanesh which were these awesome insect-orchid hybrids made of ceramic,” said Madeleine. These works came from the artist’s residency and research with Rare Books & Special Collections.

Like Barbara, Madeleine volunteers for a few hours every Tuesday.“I don’t find the time commitment difficult. I’m always excited to go and it’s great to see the friends I’ve made there,” she said.

When it comes to volunteering, our youngest and oldest volunteers are on the same page. 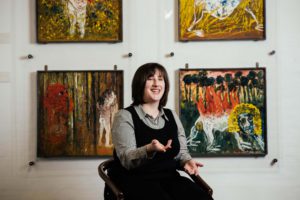 “Just go for it. It really pays off in the long run,” said Madeleine.

“I do feel incredibly supported and confident in my role at Collections. I love the variety of things to do and all the opportunities that pop up.

“I’ve learnt so much and feel better equipped for future roles in a museum or gallery environment. We’re very encouraging of one another,” she said.

Barbara agrees. “It is incredibly rewarding. Do something that interests you and you’ll meet like-minded people too.”