All writing is in a way fiction. Why would a writer then choose to write non-fiction? What are the moral questions when writing suggests that it is ‘closer to the truth’?

From her experiences as a TRC radio broadcaster and as a South African deeply affected by the Commission’s hearings, Krog published Country Of My Skull in 1998, which was adapted for film in 2004, under the title In My Country. She has since published two other books of creative non-fiction, A Change of Tongue (2003) and Begging To Be Black (2009). She has also translated the autobiography of Nelson Mandela, Long Walk to Freedom into Afrikaans (2007).

Krog’s works have been translated into English, Dutch, Italian, French, Spanish, Swedish and Serbian. Her book Country Of My Skull is being widely prescribed at universities in America and Europe as part of the curricula dealing with writing about the past.

Krog has been awarded most of the prestigious South African awards for non-fiction, translation and poetry available in Afrikaans and English, and also received an award from the Hiroshima Foundation for Peace and Culture for the year 2000, and the Open Society Prize from the Central European University (Budapest). 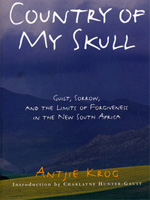 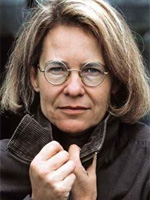