John Cage and Angela Carter in Bath – A Symposium

Musicircus is American composer John Cage’s method for translating text into musical performance. At this year’s Bath Festival, Angela Carter’s brilliant novel Nights at the Circus was adapted for Musicircus by Steve May and James Saunders as part of the Cage centenary celebrations.

John Cage (1912-1992 ) was a person of many parts-composer, writer, poet, visual artist, gourmet cook, mushroom expert-and is considered one of the most influential artists of the 20th century. Cage performed at the 1976 Adelaide Festival, polarising opinions at the time.

Angela Carter (1940-92) was one of the most original fiction writers of recent decades. She was writer-in-residence at The University of Adelaide in 1984.

At this special ‘Words and Music’ event, a screening of part of the Bath Musicircus performance will be followed by a panel discussion with composer and performer Stephen Whittington, Rosemary Moore (who knew Carter in Adelaide and London), and Maggie Tonkin, author of Angela Carter and Decadence (2012), with James Saunders and Steve May online from Bath. Chaired by Nicholas Jose. 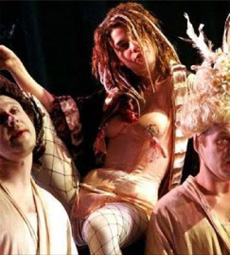