Drenching ourselves in Singapore’s History | Inside Singapore Study Tour

Bachelor of Media student Helen McNeill gives her insight on the Inside Singapore Study Tour:

Singapore’s history and cultural identity is intertwined with the wind and rains of the monsoons. Merchants from China and the Middle East relied on these seasonal winds to push their junk boats through the treacherous seas, towards the trading port of Singapura where they could exchange their goods. Thankfully we now arrive on the winds generated by jet engines, blasting across the seas, well above the dark and stormy monsoon clouds.

Our expedition into the story of Singapore begins at Ngee Ann-Adelaide Education Centre, a building that fosters a unique relationship between Ngee Ann Kongsi and the University of Adelaide.  Located in a historic heritage building, we began our discovery into the history of Singapore focusing on the way in which history plays an integral role in construction of identity.  Singapore, a rich and diverse melting pot of cultures and identities is an exceptional case of how history can be constructed to promote social cohesion.  This year Singapore celebrates its 50th anniversary of independence, its approach to the historical milestone has exemplified the use of history as a way to create a collective memory and cement the idea of ‘what it is to be Singaporean’.

Heading over to the Asian Civilisations Museum, we glimpsed into the vast spectrum of cultures that have found a home on this tiny island. Trading ships carrying merchants of Chinese, Middle Eastern, Malay, Indian and Indonesian backgrounds converged in this bustling port. The array of cultures, religions and races traded not just the physical goods that they carried, but also their ideas, morals, ethos and cultural rituals. In the museum a fabulous example of this was represented by the details of ceramics found in shipwrecks from the time. Blue paint derived from indigo which was found on white ceramics was a design that originated in Persia, however the Chinese liked the indigo colour so much that they began to produce fine china with blue motifs on them (now synonymous with the region). Details of interactions such as this provide context to the ways in which cultures have interacted with each other over time in this location, cementing the multicultural identity of Singapore from its onset.

During the short stroll to the National Museum of Singapore near the Ngee Ann Centre, the brooding clouds took the opportunity to release their tension upon the earth, resulting in a rather soggy group arriving at the door of the museum. This did not dampen our enthusiasm for the exhibitions with many students staying until the museum staff pushed us out the doors. The galleries were expertly presented, using multimedia to engage and illustrate links between the history of this small city state and Singaporeans’ personal lives, both in the past and present. 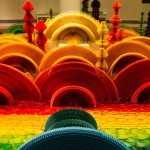 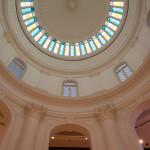 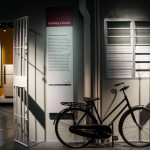 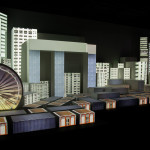 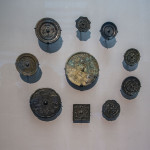 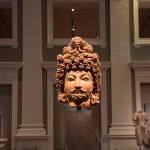