Directed by the Elder Conservatorium’s head of classical guitar Oliver Fartach-Naini, Guitarissimo is celebrating its 11th anniversary this year and has become a much treasured event for music lovers and guitar aficionados. Designed to showcase Elder Conservatorium classical guitar students, Guitarissimo concerts often include other instrumentalists and singers for a wide range of chamber music collaborations and world premiere performances.

For their upcoming performance at the Adelaide International Guitar Festival they are preparing a programme with world premieres of new compositions by Chanwoong Lee and Stephen Whittington. 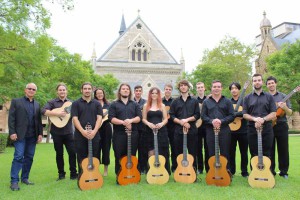