Transformation and triumph; how to win competitions and pursue greatness

When three MBA students agreed to enter a global family business case competition, they had no idea how profoundly it would impact on them personally and professionally. Each year, contestants from 25 countries travel to the USA to compete at The University of Vermont, Grossman School of Business. During four rounds of intense competition, teams are challenged to present their case to a panel of eminent judges, who scrutinise them on their ability to understand, analyse and present the case. In its 6th edition this year, it would be the first time an Australian team has entered the competition.

Back in Adelaide, to prepare the team for the competition – Frank Barbera, Co-director of the Family Business and Enterprise Research Group, was tasked with transforming skilled MBA students into Family Business experts and case study masterminds.

They were not professional public speakers, nor did they have experience in time-sensitive competitions. But with unparalleled dedication, intensive and arduous training sessions, teamed with repeated exposure to a practice ‘pressure cooker’, they braced for the impossible and sprinted to the starting line. In Frank’s words “I witnessed these guys move from very mediocre style throughout training, into great public speakers”. Whether they won or lost did not matter, because their biggest accomplishment was the transformation that occurred in that classroom over 40+ hours.

In the real competition, they would have four hours after receiving the case study, to read and analyse, create a consulting style, then formulate a presentation that would outline their solutions and approach. In their gruelling training sessions, this timeframe was shortened to two hours. Patience was tested. The politeness and boundaries of regular studying or working environments was sacrificed, because honesty and intuition was the only way to break through and develop at this pace of learning. Sean recalls, “The small ‘class’ size helped. It was a safe environment, we knew what we expected of each other and [I think] this could break some people.”

When they reflected on their reasons for joining the team, they each agreed that it would be a unique opportunity to challenge themselves beyond the norms of postgraduate study. For Jack, a second generation family business owner, there was a personal desire for growth in this space – “I was initially interested when I saw the email, because I was in family business already. But I wasn’t a great public speaker, and the due date had passed so I thought my opportunity was gone.” But Sean chimes in, “I called him though, because I knew it would be perfect for him, and luckily convinced him to sign up anyway.”

When they arrived on Day One, tensions were at an all-time high. They were placed in a fierce division, amongst experienced teams such as the Indian School of Business, and the French ICN Graduate Business School. These teams were far more ‘culturally’ aware of case studies, and this confirmed they’d really landed in the deep end.

The first presentation was one they’d been given a week to prepare for; a pre-arrival case. Perhaps because the time pressure was missing, the team came dead last. They were deflated, they weren’t expecting that. Each night involved a strategy session, then the coaches collected feedback. Once they’d been given feedback, they had a chance to relax. In a nod to great sportsmanship, the teams mingled each evening and the guys recall this being a huge relief – something that really made the competition as engaging and exciting as it was. Jack reflects on those nights, “The socialising was amazing. The whole event was so well planned, and even if the days were hyper competitive, the networking was still laid back.”

Brent felt as though it added another layer of value to the trip overall, “Having the opportunity to network with a global cohort of extremely talented students from across the globe as well as respected academics, family business owners and consultants was one of the major highlights. ‘It’s who you know’ certainly applies in business and this was a great opportunity to build a global network in a variety of different business fields, experience and geographic locations”.

Despite this positivity, Frank needed to prepare them for Day 2, calm their nerves, and inspire them to move forward despite such significant setback. His pep talk was simple, “This is only the beginning. We can curl up and cry, or we can tweak our strategy and get better.” Frank recalls this being their big ‘failure’ moment; the one that would motivate them to push harder, remember their training, and set alight that internal fire that the other teams clearly used to win.

This case was timed at a breezy four hours. After practicing at double that speed, it felt like an eternity for them now. They were revitalised with more energy than Day One, and it was reflected in their renewed position on the leaderboard. Second place. The first and only Australian team in the room, they were proud, confident, and in a short time – felt as though they’d already achieved so much. In Sean’s words, they’d learned how to “wing it properly”.

Coming from dead last, they’d definitely mastered the uphill climb on the previous day. Their public speaking and presentation skills were truly tested, and when Jack thinks back to how they’d changed, he says “we learned to present information in an understandable way”. Something that must have been working well, because they placed first during this round and shocked everyone, including themselves.

Winning was a possibility and that hadn’t quite sunk in yet. Frank’s advice for the elated team going into the final day was “Don’t change anything. But if you see an opportunity to take a risk now, take it.”

The controversial case. All of their cases up to now had been very family focused, but this one was different. It was loaded with business implications, and even caused some upset amongst the other coaches. What was already an intense competition, just got escalated. But no-one was watching them until now; they were unexpected. Underdogs in a sense.

Sean recounts that day and how close they came to line: “There was 15 minutes until we were expected to present. Only half the slide deck was finished, and it was a seriously tough case.” But despite the immense pressure, both in time and ability, he’s passionate about their team connection – “We still never had a crack at each other. We’d essentially survived the pressure cooker either way, which was our biggest feat. So much mateship had developed, plus incredible respect for each other, and our team dynamic was unbeatable”.

Using their knowledge of business, plus the training back in Adelaide, and pulling together in those final 15 minutes, they presented a very different strategy to the other teams. They said they realised that in business ‘sometimes things are just bigger than the family’.

Frank tells how the other teams seemed to ignore key aspects of the case because they were so focused on the family side still. But we hit the issues correctly, and they all performed really well.

When they announced that The University of Adelaide had won, there was a huge sense of relief on Frank’s part, but obviously elation. The room erupted, and our newfound friends were just as happy about it as we were. Jack believes they won because they agreed to take the risk, and the trust and teamwork involved in that was crucial.

Back in Adelaide, when asking the team to reflect on how this transformation occurred – they agreed it came down to getting out of their comfort zones, and taking a leap of faith.

And aside from taking home a trophy, it was clear they had gained so much more; building new friendships, developing incredible skills in analysis, teamwork and delivery, and understanding that they were capable of great things just by identifying their limits and then superbly defying them. 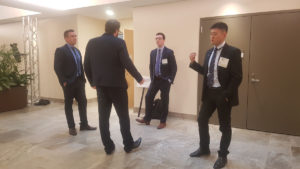 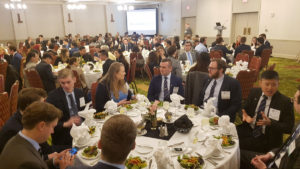 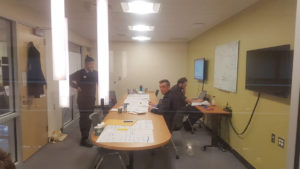 The room of competitors 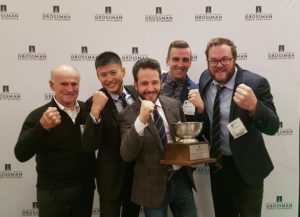 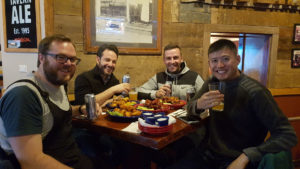 Enjoying a rare moment of relaxation

This entry was posted in Connect, Family Business, Students. Bookmark the permalink.