The School of Computer Science recently celebrated its awards night, where we acknowledge the achievements of our students and also our staff over the past year. 2015 was a fantastic year for the School, with significant achievements across our teaching and research, and some fantastic outcomes for our students.

Dr Claudia Szabo was awarded an Office of Learning and Teaching Citation for Outstanding Contributions to Student Learning, while Dr Nick Falkner was awarded the Stephen Cole the Elder Award for Excellence in Teaching. Dr Rebecca Vivian received ‘New Voice’ in Educational Leadership Research Scholarship from the Australian Council for Educational Leaders. The School also launched its first AdelaideX MOOC in partnership with EdX, Think Create Code, reaching over 25,000 students from 177 countries.

The School achieved a record level of successful research grants and industry research contracts, across the range of research areas within the School, including a prestigious DECRA Award for Dr Markus Wagner.

Our students have achieved fantastic results including success for Reza Bonyadi and Zhigang Lu who both received University Research Medals. A team from the School, including Alessandro Scarpantoni, Cuong Nguyen and Erfan Rayga, along with Dr Damith Ranasinghe won top prize at the Telstra Internet of Things Challenge, held in Melbourne. We also saw success in the Unearthed Hackathon, with winning team members, Konrad Janica, Ravi Hammond, Jack Gerrits, Tullie Murrell and Daniel Camilleri.

Staff from the School of Computer Science meet with our award winning students, their families, and our industry partners.

At the awards night, we also acknowledged a number of academic prizes awarded for high achievement in our courses.

The Google Prize for Honours in Computer Science: Markus Low 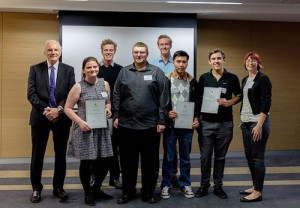 We were also privileged to welcome back our recent graduate Frances Johnson, who was able to talk to us about her experiences working with Google, and her adventures since leaving the School. 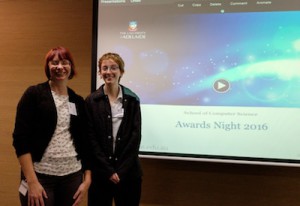 Many thanks to Nguyen Khoi Tran for being our photographer on the night.

This entry was posted in Computer Science, News. Bookmark the permalink.