The school’s unique exhibit on level 4 of the Ingkarni Wardli building included a number of interactive showcases from the Introduction to Programming and Object Orientated Programming courses, showing prospective students what can be achieved after completing their first semester of programming.

On the other end of the spectrum of showcases the school demonstrated the breadth required in generating 3D scenes and realistic effects in real time as well as complex learning tools for the general public and radiologists in training. An honourable mention goes to a PhD student who showcased his research using a series of 2D images taken from a simple camera moving around a scene to create a 3D model. The applications for such technology branch into self-driving cars and autonomous robotics.

The central hub of the level 4 experience promoted the fundamentals of Computer Science to the entry level prospective students. The interactive programing lab allowed for problem solving using bite sized amounts of code for some guided hands on experience. A number our friendly faces who greeted visitors roamed our hands-on puzzle station where visitors have a go at solving problems without a computer – a fundamental activity computer scientists share. The education display opened guests eyes to an amazing demo of virtual reality with an ordinary smartphone and an introduction to the programs and research into Computer Science education spanning higher education to primary schools.

The last but no means least impressive section of the schools exhibits were the hobbyist projects, done by the students in their own time. The schools centre stage hobbyist project was the Leap Motion demonstration of the Pokemon Go themed throw-and-catch game after the recently released mobile app. Visitors of all ages came by to have a go at catching some of the most famously recognised creatures with their hand in a virtual environment.

A visitor who attended our final tour of the day was amazed at the creativity in the demonstrations that prompted them to say “How do you sleep at night with all these idea’s floating around!”. In all honesty, that sounds about right. 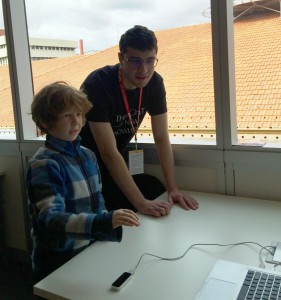 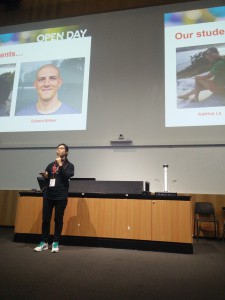 This entry was posted in Computer Science, Events, News. Bookmark the permalink.