The Don Dunstan Foundation is deeply saddened by the unexpected passing of Professor Graeme Hugo AO.  Graeme has been a great friend and supporter of the Foundation giving freely of his time and professional opinion. He was instrumental in setting up the now well established Dunstan Foundation Annual Migration Update Conference. 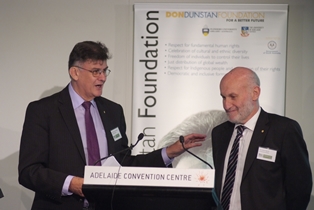 Graeme had a brilliant and penetrating mind and was intensely dedicated to his work, writing prolifically on population and migration. He won international respect and became a much loved friend and colleague to a great many in the international academic community.  Our society has been a constant beneficiary of his work with his views being sought at all levels of government.  He could be relied upon to uncover the facts and deliver them objectively. The depth of his knowledge and understanding of his field is rare.

The Foundation will continue with the legacy of Graeme’s work through the organisation he established, the Australian Population and Migration Research Centre at the University of Adelaide.

Graeme touched many in his life time with his genuine nature, generosity and his unrelenting commitment to his work. He will be sorely missed.

View all posts by Benjamin Waters →