Celebrating the 40th anniversary of gay legalisation in SA 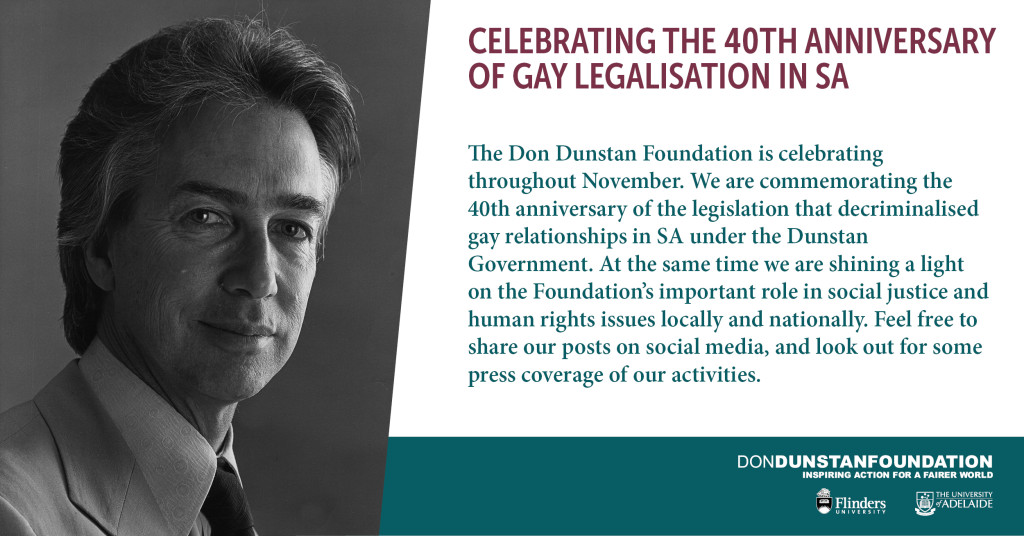 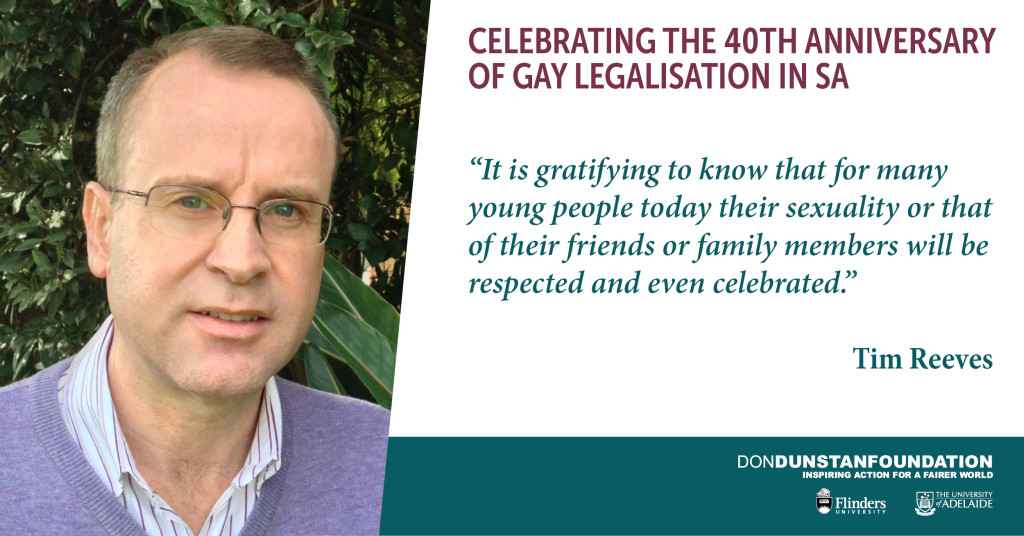 What is your understanding of the ways in which the change in legislation has affected the lives of people within the gay community (the 1975 legislation is specific to homosexual men)?
The terrible stigma which surrounded male homosexuality has been significantly lifted. There will always be ignorance, prejudice and bigotry, but it is gratifying to know that for many young people today their sexuality or that of their friends or family members will be respected and even celebrated.

What are the most significant challenges that the LGBTIQ community face today?
There are important issues like marriage equality and access to adoption and reproductive rights that are still being pursued. But we must not forget that transgender and intersex persons are an important part of our community and they are still battling for the most basic human rights. 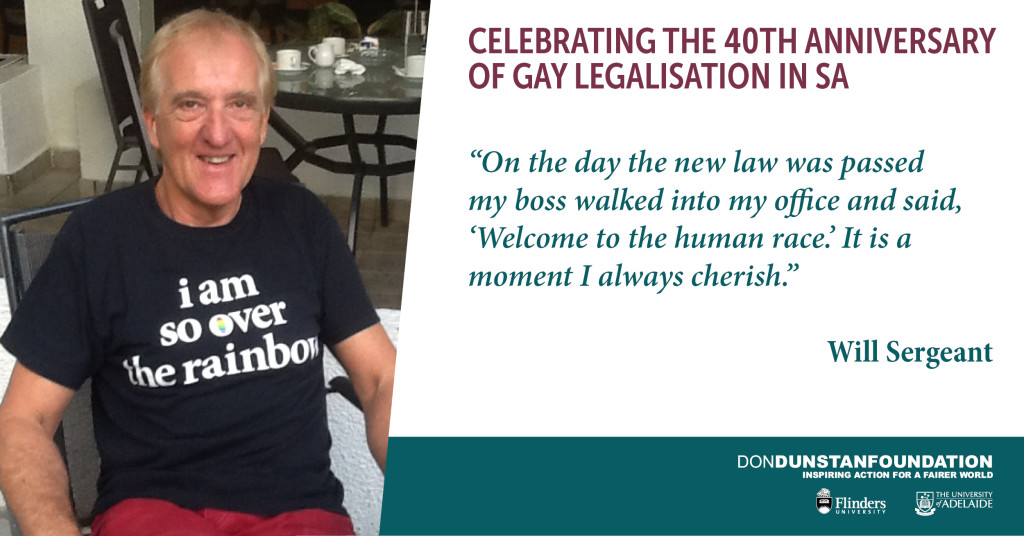 As a youthful Gay Liberationist in the early 1970s there was something a little exciting and risqué about being an ‘outlaw’! However achieving decriminalisation gave a sense of legitimacy and validation of who one was, which was very important. On the day the new law was passed my boss walked into my office and said, “Welcome to the human race.” It is a moment I always cherish. One was proud to be a South Australian as we were the first state.

I see this legislation as the beginning of a legitimisation process. Anti-discrimination legislation followed in the 1980s; recognition of same sex couples’ legal rights this century; and not far off marriage equality will be achieved. These are not just legal matters, they are also important symbols of a more tolerant, accepting and diverse society. Such legislation sends an important message to the broader community.

I think recognition and acceptance of trans and intersex people still has a way to go. Changing laws and encoding rights is important but is it also about education people; changing attitudes, hearts and minds. In our secular democracy religious institutions should not be exempt from anti-discrimination legislation. This must change! Homophobia still exists and must be challenged whenever encountered. We must not shy away from recognising adolescent sexuality. The education system has an important role to play here. 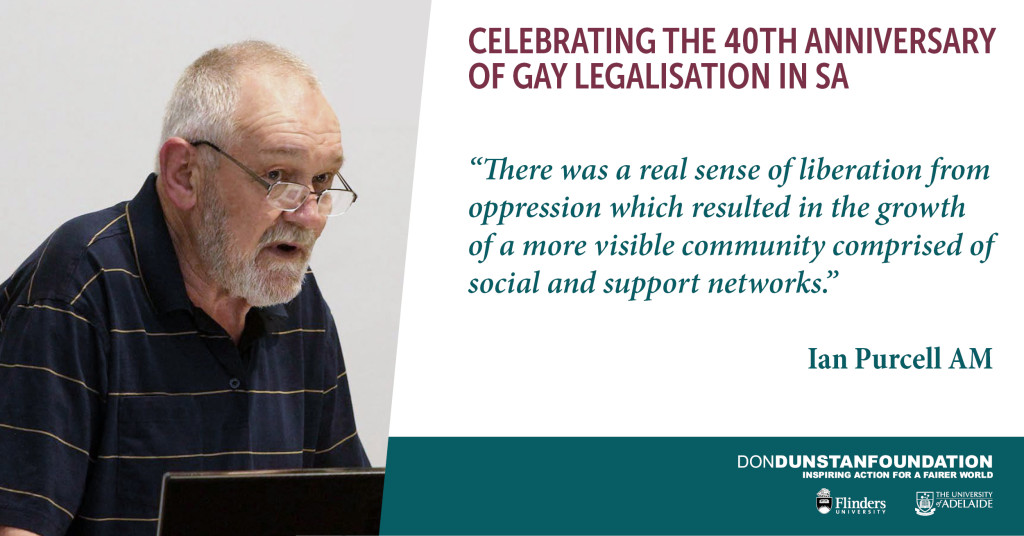 I spent 1975 overseas. I left as a sexual ‘outlaw’, I returned as a sexual ‘inlaw’. What a difference a year makes. Not that I especially felt safer because of this defining moment. For, although homosexuality was now ‘legal’ in South Australia, the law did not protect me from discrimination in the workplace, nor the conflation of homosexuality with paedophilia, a prevalent mind-set at the time. I was a teacher. Ironically, anti-discrimination legislation was passed in 1984, the year I left teaching.

Many men continued to live closeted lives, still fearing social opprobrium and the lack of legal protections against discrimination on the grounds of sexuality (at least until the Equal Opportunity Act was passed in 1984). On the other hand there was a real sense of liberation from oppression which resulted in the growth of a more visible community comprised of social and support networks, a proliferation of clubs, groups and organisations, and a loud and vibrant gay bar and nightclub ‘scene’. This period of freedom and celebration lasted a short ten years before AIDS struck. Thank goodness these ten years had allowed time for the development of structures within the community and connections with government which enabled a quick response to the epidemic.

The most obvious challenges that the LGBTIQ community still face are the amendment of laws that are still discriminatory and the provision of dedicated, equitable government services. Beyond this in the interesting long-term issue of assimilation with mainstream society. Some argue that this is inevitable, that as society is becoming more understanding and accepting of sexual and gender diversity, LGBTIQ people no longer need the protective buffer of ‘community empowerment and pride’. After all, the argument goes, in all other respects, we are the same as everyone else. Others however maintain that we must continue to celebrate our difference, that society by dint of overwhelming numbers will always be heterocentric, and that our sexual and gender diversities provide sensibilities that we cannot expect a heterosexual majority to have, or understand, no matter how accepting society becomes. I’m with this mob. 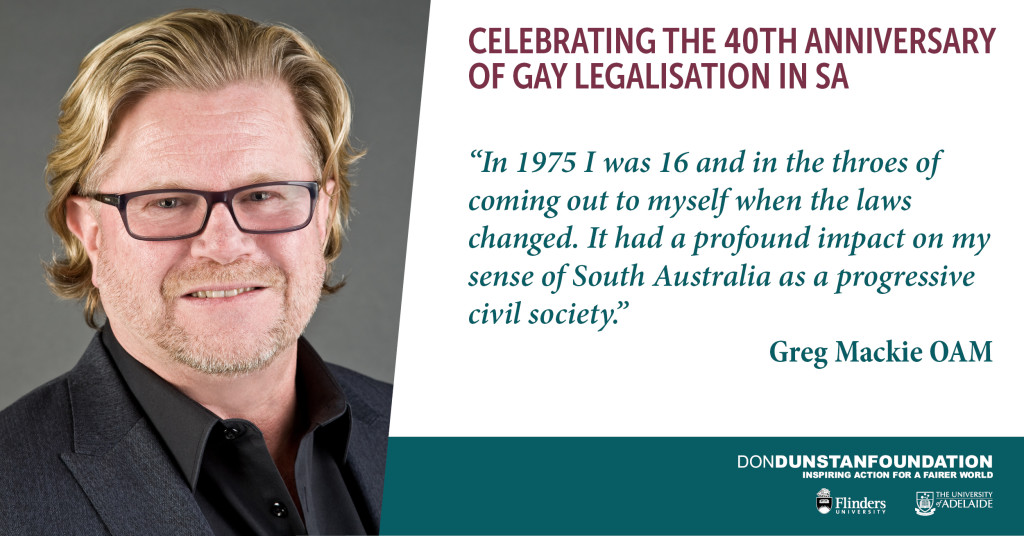 In 1975 I was 16 and in the throes of coming out to myself when the laws changed. It had a profound impact on my sense of South Australia as a progressive civil society. Following the Dr Duncan murder and hysteria from the so-called ‘moral majority, it took me five more years to have the courage to come out to my family and friends. The Dunstan Government made me feel proud to be South Australian – it led a human rights agenda from the front and shone a light for others to follow. But the price of progress is eternal vigilance – parliaments can legislate for behaviour but not for attitudes. A heart’s journey along the road less travelled still demands courage and resilience, and as Don was want to say ‘there’s work to be done’!