Last Thursday saw the culmination of the Australian eChallenge for 2014 with an awards dinner at the Adelaide Oval with competition finalists, their families and supporters, sponsors and University staff.

It was a fantastic event that was enjoyed by all in attendance. The huge turn out on the night demonstrates the great support for local innovation and entrepreneurship that the Australian eChallenge enjoys in the local community.

The ECIC would like to congratulate this year’s winners!

In the public stream, first prize went to Virtual Energy, who not only took out first place winning $10,000 in cash and $15,028 in consulting prizes, but also were the recipient of the Vroom and the People’ Choice award!

Other winners from the public stream were:

Light were the runners up and received a cash prize of $5,000 and$6,358 in gifts and consulting prizes. In addition they picked up the $10,000 A Day@Microsoft Prize; and will head to Austin Texas to compete in the Global Venture Labs Investment Competition next May.

The ECIC Commercialisation Encouragement Award, which is desk space at the ECIC ThIncLab Business Incubator for a year was won by Freshly Squeezed Business and the Australian School Search won the $3,000 mentoring program from Commercialiseit.

And the prize winners for the secondary school competition went to:

So that’s it for 2014! Congratulations again to all of the winners and we look forward to doing it all again in 2015, especially with the introduction of the inaugural Australian eChallenge France. 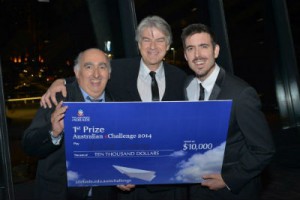 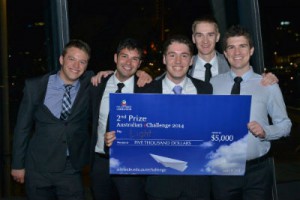 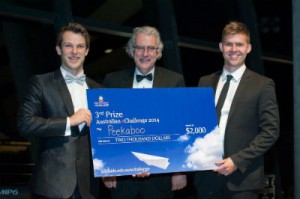 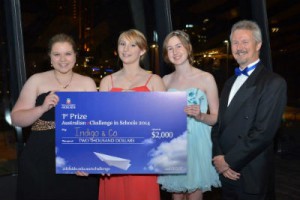