But, importantly, the program also opened up the industry to broader influences. Stuart McCullough, AWI CEO, noted, ‘Many of the participants have brought their skills and enthusiasm from outside the wool industry. The variety and quality of innovative digital ideas to improve the productivity and profitability for Australian woolgrowers has been great to see.’ 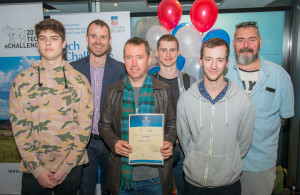 Wireless Farm took out the top prize of $20,000. The team, which included students and staff from Charles Sturt University and TAFE NSW, pitched a proposal for a low-cost wireless system that will help farms to keep track of livestock.

‘On most farms there are lots of things that need checking on a regular basis: where are the sheep, are the sheep okay, do they have water, food? Most farmers complete these tasks by spending huge amounts of time driving around and manually confirming everything is as it should be. This wastes significant time and energy,’ says Wireless Farm team member Dan Winson.

‘The root cause of this problem is that information is currently locked to physical locations. The result is substantial negative impacts on operational efficiency, with flow on effects on quality, the environment, job satisfaction, fatigue, quality of life and mental health.

‘Our solution: a farmer enters sensor locations and other details into our app, then we ship custom-designed wireless sensors and preconfigured commercial off-the-shelf wireless infrastructure to them, which they can install,’ Mr Winson says.

He says a custom-built wireless sensor for water level sensing has already been developed and can be supplied at a cost of $70 per sensor. Other sensors are in early prototype stages.

“Australian Wool Innovation is delighted to have been part of this innovative approach to attracting the best young minds in the “Tech World” towards thinking about wool.” Stuart McCullough, AWI CEO.

Wireless Farm was one of three major winners from the event, with SHOUTback! and Scaleseeker both sharing in the other main Tech eChallenge prize, sponsored by Microsoft – a trip to Microsoft headquarters in Seattle valued at $20,000. SHOUTback! proposes a digital voucher system that can be used by the hospitality industry, while Scaleseeker’s proposal is based around a mobile role-playing game set in a fantasy world.

‘The quality of entries this year has been outstanding,’ Professor Lindsay says.

‘We’ve been excited to see many innovative solutions to a range of business problems, including those for our primary producers, whose work is so critical to the Australian economy.’

Australian eChallenge Wool Innovations will commence 27 July 2017. For more information or to register, head to www.adelaide.edu.au/echallenge.