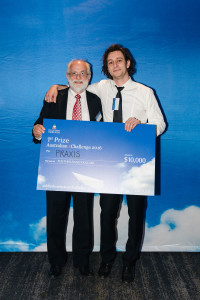 Praxis receiving their award in November 2016.

Australian eChallenge 2016 winners, Praxis Aeronautics, continue to go from strength to strength with their innovative solar powered drones. They have just secured $150,000 worth of funding under the State Government’s Early Commercialisation Fund which will allow them to scale up and commence commercial manufacturing and sales.

Praxis Aeronautics has created a process by which solar cells can be encapsulated into a composite material, such as the body of a drone. Whilst solar powered drones do already exist, they are currently not as efficient as Praxis Aeronautics’ design. “Our new manufacturing process is disruptive because it enables standard solar cells to be used in a much more productive way,” said Managing Director, Don Donaldson.

The government funding is administered by TechInSA, offering start-ups and early-stage companies customised programs including grants, business and marketing assistance and lab and office space, as well as assisting with access to global networks. TechInSA also supports the new Cybersecurity eChallenge stream. “By supporting the state’s researchers and entrepreneurs, we are creating the jobs of the future and investing in the incredibly innovative ideas that are being generated in our state,” said Manufacturing and Innovation Minister, Kyam Maher.

The Australian eChallenge is proud to play its part in this dynamic support network, and we’re certain that the sky is the limit for alumni Praxis Aeronautics!

This entry was posted in Misc. Bookmark the permalink.