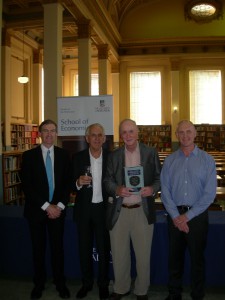 The keynote addresses were given by the Vice-Chancellor, Professor Warren Bebbington, and the President of the Economic History Society of Australia and New Zealand, Professor Martin Shanahan. Also attending were Adelaide City Council Councillor Anne Moran, Executive Dean, Faculty of the Professions, Professor Christopher Findlay, distinguished legal historian Professor Wilf Prest, staff and students from the universities of Adelaide and South Australia, officers of the SA Economics Teachers Association, and other members of the public. 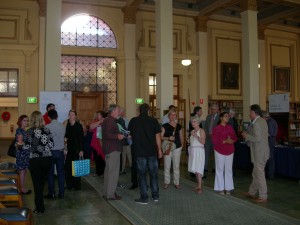 Australia’s economic history is the story of the transformation of an indigenous economy and a small convict settlement, into a nation of nearly 23 million people with advanced economic, social and political structures. It is a history of vast lands with rich, exploitable resources, of adversity in war, and prosperity and nation building. It is also a history of human behaviour and the institutions created to harness and govern human endeavour. This account provides a systematic and comprehensive treatment of the nation’s economic foundations, growth, resilience and future, in an engaging contemporary narrative. It examines key themes such as the centrality of land and its usage, the role of migrant human capital, the tension between development and the environment, and Australia’s interaction with the international economy.
To order the book please go to: www.cambridge.edu.au

This entry was posted in Events, Uncategorized. Bookmark the permalink.