In July this year, Themis Scanlon (Convener of the University of Adelaide Fair Trade Collective) and a fellow student (Boshen Li) attended the Fairly Educated Conference at the University of Tasmania. In her third year at the conference, Themis found the content enriching and thought provoking. For the first time, Themis also played a lead role as a panelist, speaking to delegates about the University’s experience with fair trade and providing advice to many students that were new to the movement.

The conference brought together more than 50 students and a number of staff from 9 Australian Universities with an aim to:

The conference program was build upon the pillars of Learn, Act and Succeed.

What is Fair Trade?

Fair trade is a social movement that aims to help producers in developing countries to make better trading conditions and promote local sustainbility of industry. It advocates the payment of a higher price to exporters, decent working conditions and fair terms of trade for farmers and workers. By requiring companies to pay sustainable prices, Fairtrade addresses the injustices of conventional trade, which traditionally discriminates against the poorest, weakest producers. It enables them to improve their position and have more control over their lives. 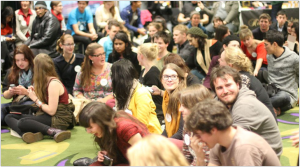 5 Key Points that Themis came away from the Conference with:

If you are a student and want to get involved in Fair Trade on campus, contact Themis Scanlon (Convenor) at fairtradecollective@auclubs.com.au or find the Fair Trade Collective on facebook.

If you are a staff member, consider encouraging your school or area to make the switch to Fair Trade products. Contact ecoversity@adelaide.edu.au or the Fair Trade Collective for assistance, tips and resources.

This entry was posted in News, News and Events. Bookmark the permalink.