Dr Lee Arnold and Dr Martina Demuro have published a study of the Atapuerca palaeoanthropological sites which builds on the recent Science paper from Sima de los Huesos (Arsuaga et al., 2014) and focuses on resolving the age of the iconic Acheulian lithic industry at the neighbouring site of Galería Complex. 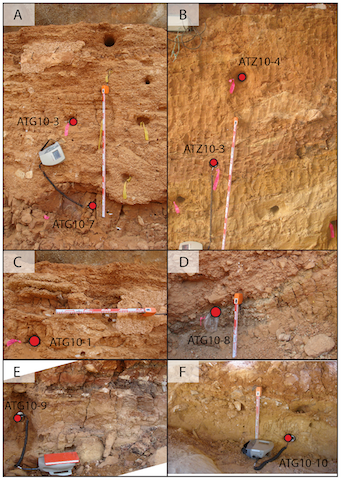 Photos showing the location of the luminescence dating samples and the types of deposits investigated at Galería. (Credit: PLOS ONE)

Main findings of the study:

The paper was entitled “New Luminescence Ages for the Galería Complex Archaeological Site: Resolving Chronological Uncertainties on the Acheulean Record of the Sierra de Atapuerca, Northern Spain” and published in the open access journal PLOS ONE.

You can read more about skulls dug up from the The Sima de los Huesos (pit of bones) and the findings that were uncovered in our blog post from earlier this year: “New clues to evolution dug up from world’s largest human fossil collection”.

A PhD scholarship is available as part of an Australian Research Council (ARC) funded project entitled “Trying times: Millennial to million year chronologies for improved reconstructions of Australian megafaunal extinctions.” This 3-year PhD scholarship is open to domestic and international students, and includes a living stipend of AU$25,850 per year. The planned starting date is […]

The Sima de los Huesos (pit of bones) is a cave in northern Spain from which 6500 human fossils from at least 28 individuals have been recovered to date. Analysis of skulls from the earliest humans with Neandertal-like features reassigned the age of the fossils to about 430 000 years ago. Dr Lee Arnold, from […]

Environment Institute celebrates success with the latest ARC funding round

In the latest round of ARC funding announced today Environment Institute researchers received five ARC Discovery grants, four Future Fellowships and a DECRA. This is a huge achievement for the Institute and we congratulate all involved. The combined worth of the grants is over $5 million. Discovery Grant Recipients Professor Alan Cooper, Associate Professor Phill […]

This entry was posted in Publications. Bookmark the permalink.