To quote Franck: “I have been working for years on biological invasions. You know, the species that are put into regions in which they don’t belong and that just expend madly and outcompete everything, unchecked. A bit like Mcdonald’s in France. Because I’ve also started working on the impact of climate change on biodiversity, I’ve naturally wondered (like many) whether climate change would affect biological invasions.” 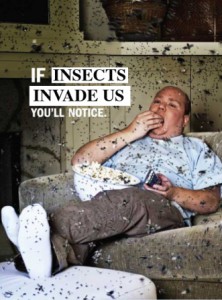 Promo for the InvaCost project: From Biodiversity Dynamics.

Humour aside, the topic of Franck’s seminar is particularly emotive, especially when we think about what might happen if invasive insects were to negatively impact populations of bees. As Franck points out on his blog, remember what Einstein said about pollinators:

If bees were to disappear, humans will disappear within a few years.

Prof Corey Bradshaw has worked closely with Franck in the past, and is now involved with a project Franck is spearheading called InvaCost, which aims to assess the economic damage that invasive insects could produce as a result of climate change. Corey has blogged about the project in more detail at ConservationBytes.com.

For more of Franck’s humour, as well as information about InvaCost and the current and potential cost of insect invasion worldwide check out the Biodiversity Dynamics blog.

Franck’s seminar entitled “Interactions between climate change and biological invasions” is available for viewing below.

You can also read of Franck’s most recent publications entitled “Vulnerability of biodiversity hotspots to global change” check out his blog Biodiversity Dynamics and follow him on twitter @franckcourchamp.

Science in the Pub. The bees knees: The importance of pollinators and their recent decline

Professor Corey Bradshaw will be one of the panelists at the upcoming Science at the Pub events. When: Friday, December 5th, 6 p.m. – 7:30 p.m. (Arrive at 5:30pm for free nibbles and to ensure you get a seat!) Where: The Brunswick Hotel 207 Gilbert Street, Adelaide, SA 5000 More info: Science at the Pub webpage The topic: […]

The Environment Institute is excited to host Franck Courchamp, who will be visiting Adelaide from Paris to present a seminar entitled: “Interactions between climate change and biological invasions”. About Franck: I did my PhD thesis in Lyons, France, on the epidemiology of Feline Immunodeficiency Virus as a marker of population structure of feral cats. I then did […]