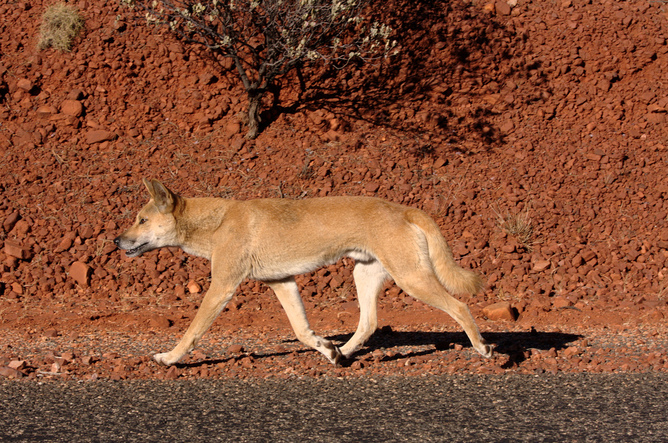 Now the same group, along with A/Prof Phill Cassey, show that despite the conventional perception of Dingos as a pest that needs to be controlled, Dingos could actually bring economic benefit to cattle graziers.

The benefit is nothing to sneeze at either. Models as part of research published in The Journal of Applied Ecology show that the profit margin could be improved by as much as $83 000 a year for a 100 000 hectare cattle station.

So where does this profit come from?

Dr Thomas Prowse explains: “Our study challenges the conventional perception of dingoes as an economic pest that must be controlled. By helping dingoes thrive, we expect improved biomass of native pastures through the reduction of kangaroo populations – and improved returns to cattle graziers.”

The researchers developed a multi-species model of the food chain and economics of a rangeland cattle enterprise, including simulations of pasture regrowth, grazing pressure and cattle live-weight gain. Trade-offs between livestock density, kangaroo abundance, calf losses and dingo control were examined. Because as we all know-Dingo’s are a threat to livestock, right?

“Dingoes are predators and they do occasionally take out young livestock, but they also eat a lot of kangaroos and, in fact, seem to prefer them,” says co-author Professor Corey Bradshaw, who was recently appointed Sir Hubert Wilkins Chair of Climate Change.

“In a typical cattle station setting in arid Australia, cattle and kangaroos compete for the most limiting resource – grass and other vegetation. With fewer kangaroos around, there is more grass for cattle to eat and more food means bigger and fatter cattle, which leads to more profit for the grazier.”

Podcast- The Wild World of Dingos

Radio Adelaide chats to PhD student Jack Tatler, although “dingo whisperer” would also be an apt title. Tatler is studying the role of dingos in the ecosystem. He studies both wild and captive dingos, equipping them with specialised GPS collars to track their every movement. Listen to the podcast to learn more about his research or read […]

SA scientists have their say

Professor Corey Bradshaw from Adelaide University’s Environment Institute was one of four scientists interviewed for Aspire Magazine’s Feb/Mar 2015 edition. Professor Bradshaw, a conservation ecologist, is global ecology co-director, director of ecological modelling and chair of climate change at Adelaide University. Corey’s passion about the importance of scientific research into climate change, and its […]

The 70’s are over. Professors Corey Bradshaw and Barry Brook’s latest research shows clearly that it is time for objective comparison of potential energy sources including nuclear, if we are to minimise net environmental damage. More than 60 leading environmental scientists from 14 countries around the world agree, and have signed an open letter in support […]

This entry was posted in Conservation Science and Technology, GEL, Media Release and tagged Corey Bradshaw, Dingo. Bookmark the permalink.