In January 2014 Sarah was awarded the Dean’s Commendation in Doctoral Thesis Excellence for her PhD project: Using mesozoan dicyemid paracites to infer the population structure of giant Australian cuttlefish, sepia apama, in southern Australian waters. Only candidates who have produced a thesis of excellent quality are eligible for this award, which was advocated by both of Sarah’s thesis examiners.

Sarah’s PhD was completed in 2014 with Professor Bronwyn Gillanders, Associate Professor Ian Whittington and Professor Steve Donnellan as her supervisors. 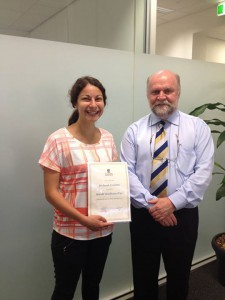 She won the SA Channel 9 Young Achiever Award in the Flinders Port Holding Environment category in March 2014, and the SA Science Excellence Awards in PhD Research Excellence in the Life and Environmental Sciences Category in August  2014. In December 2014 Sarah also won the Harold Woolhouse Prize for best PhD thesis produced in the Faculty of Sciences.

Working with Professor Steve Donnellan in the Evolutionary Biology Unit of the South Australian Museum, Sarah is currently working on a joint ARC – linkage project investigating dicyemid paracites and their unusual mitochondrial genome, as well as characterising the molecular genetics of their cuttlefish host.

Researchers from the Environment Institute have been honoured as finalists for the 2016 South Australian Science Excellence Awards. The awards recognise and reward outstanding scientific endeavour, including its application in industry and the advancement of science and mathematics education. Our congratulations goes to Dr Kieren Mitchell, who has been nominated for PhD Research Excellence and Early Career […]

Meet research scientist Dr Sarah Catalano, featured in the University of Adelaide’s new research blog. Sarah’s research relates to marine parasitology and molecular evolution. Her PhD undertaken at the University of Adelaide has added an abundance of knowledge about the little known dicyemid faunal composition and ecology. She has formally described 10 new dicyemid species from […]