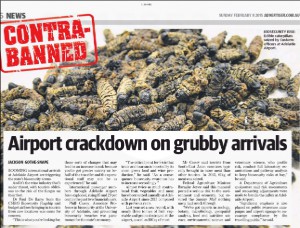 The amount of seized fruit, vegetables and meat at Adelaide Airport has increased in recent years, and Associate Professor in biosecurity at the University of Adelaide, Phill Cassey is concerned biosecurity breaches will have a negative effect on South Australia’s economy.

“The critical point for SA is that trade and tourism is boosted by its clean green food and wine production. As a consequence, biosecurity awareness has to increase accordingly.”

Phill Cassey’s interview was published in the Advertiser, Sunday Mail on 8 February, 2015.

More information about biosecurity can be found on the Environment Institute website.

Four members of the University of Adelaide community; a pioneering fertility surgeon, a wildlife biologist, a snakebite expert and a law reformer, have been awarded in this year’s Australia Day honours. Associate Professor Ossie Petrucco received an AM for significant service to medicine and education in the field of obstetrics, human reproduction and child health. […]

The University of Adelaide has launched a joint Australia-China centre for agriculture and health at its Waite campus with leading ‘China 9’ university, Shanghai Jiao Tong University. The two universities are working together to contribute to the national food, water and health targets of their respective countries under four themes: agriculture and wine; land and […]

The Environment Institute congratulates PhD student, Pablo Garcia Diaz for winning the Student Prize for his presentation at the Statistics in Ecology and Environmental Monitoring (SEEM) 2015 conference in Queenstown, New Zealand recently. Pablo won over the judges with his 5-minute ‘speed talk’ presentation about his research into the preparedness of Australian border and post-border […]

Take some time to view the amazing research highlighted in the new Conservation Science and Technology (CST) website. The Conservation Science and Technology Program is directed by a team of experienced researchers from the Environment Institute and the School of Biological Sciences at the University of Adelaide. Professor Andy Lowe, Associate Professor Phill Cassey and Associate […]

eScience. Species for sale: Globalisation and the management of exotic imports

The work of Associate Professor Phill Cassey has been featured in the May 2014 eScience magazine. In the feature Phill Cassey explores how science is improving our biosurveillance efforts. “Biological invasions are one of the many negative consequences of human-caused global change. The introduction and establishment of invasive species (animal pests, weeds, and diseases) around […]