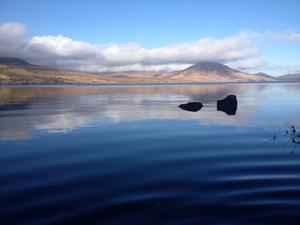 Associate Professor Justin Brookes was one of 74 science researchers involved in recently publishing an article in Scientific Data entitled, “A global database of lake surface temperatures collected by in situ and satellite methods from 1985-2009“. This article, published by Nature, summarises a new lake temperature database.

These scientists are part of the Global Lake Temperature Collaboration (GLTC), an international group assembled to provide increased access to global lake temperature records. Since 2010 the GLTC initiative has grown to a database of 291 lakes and reservoirs worldwide, providing summer-mean lake surface temperatures from 1985-2009, significantly increasing the amount of data previously available from satellites alone. This new dataset represents the first publicly available global compilation of in situ and satellite based lake surface temperature data.

Associate Professor Justin Brookes from the University of Adelaide’s Environment Institute, recently wrote a piece for The Huffington Post as part of their “What’s Working: Sustainable Development Goals (SDGs)” blog series. Access to clean, safe and secure water sources is essential in order for communities to be able to thrive. Unfortunately there are still many communities […]

Radio Adelaide recently interviewed Dr Anna Rigosi, a post-doctoral research fellow at the Water Research Centre at the University of Adelaide’s Environment Institute about her study into the impacts of climate change on algal blooms. Dr Rigosi’s research focuses on the interaction between climate change and nutrients controlling bacterial blooms in fresh water. She believes […]

Resilience to Blooms – Published in Science

Justin Brookes, Director of the Water Research Centre at The University of Adelaide, and Caylean Carey have had an article published in Science today. The article is titled ‘Resilience to Blooms’ Science 7 October 2011: Vol. 334 no. 6052 pp. 46-47 DOI: 10.1126/science.1207349 ABSTRACT Cyanobacterial blooms (see the figure) present health risks worldwide for humans […]

This entry was posted in Publications, WRC and tagged Associate Professor Justin Brooks. Bookmark the permalink.