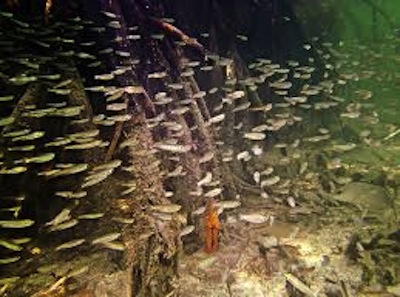 Mangroves and other coastal ecosystems are important nurseries for recreational and commercial finfish and shellfish species. Yet almost half of the global coverage of mangrove has been lost due to humans. To sustain their important ecosystem services adequate management is needed. However, evaluation of their nursery role for management purposes is largely based on protecting single habitats which is largely ineffective.

Associate Professor Ivan Nagelkerken from the University of Adelaide’s Environment Institute was one of four researchers involved in an article entitled ‘The seascape nursery: a novel spatial approach to identify and manage nurseries for coastal marine fauna,’ published in Fish & Fisheries.

The article explores a new approach for more effective identification, valuation and management of nurseries based on a habitat mosaic approach. This also incorporates the important linkages that exist between mangroves, seagrasses, salt marshes and other habitats via pervasive fish movements, which underpins their nursery function, fisheries productivity as well as biodiversity.

Associate Professor Ivan Nagelkerken from the University of Adelaide’s Environment Institute was interviewed by The Lead about his research into the effects of ocean acidification on marine environments. The research undertaken by Ivan Nagelkerken, Bayden Russell, Bronwyn Gillanders and Sean Connell, has been published in Nature Climate Change. The study details how predicted ocean acidification from climate […]

Podcast: Protecting the ecology of the Spencer Gulf

Professor Bronwyn Gillanders from the University of Adelaide’s Environment Institute was interviewed by Sarah Martin on Radio Adelaide’s The Sound of Science program about her thoughts on protecting the ecology of the Spencer Gulf. The Spencer Gulf is home to many unique sea creatures, such as the giant cuttlefish. In her interview, Professor Gillanders explores […]

Professor Frank Grutzner is fascinated by monotremes. Monotremes are egg laying mammals, such as platypus and echidna. They are the oldest surviving mammalian lineage, and therefore provide a unique insight into the evolution and many aspects of genetics in all mammals. The extraordinary biology of monotremes also enables researchers to gain insights into human disease. […]