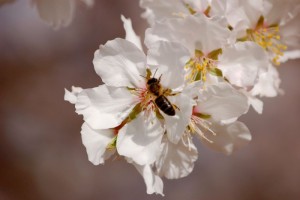 A recent ABC news story has reported on a project to map bee activity and gain a better understanding of the habitat and food sources needed for their continued survival. The South Australian government and the University of Adelaide have both contributed $300,000 each to the program.

“We want to prevent bees dying in the future, so we have to plant bee food so that bees can be maintained locally,” said University of Adelaide research associate Dr Katja Hogendorn.

The parasitic varroa mite has been deadly to many bee populations around the world and proves a very big threat to industry if it was to happen in Australia.

Research has for the first time revealed the heavy metal secret behind an Australian bee’s unique approach to pollination: high-speed headbanging. In an effort that would put metal fans to shame, the native blue-banded bee has been filmed head banging flowers up to 350 times a second. (See the slow motion video) The technique causes […]

The University of Adelaide and State Government today announced a $600,000 pilot program to help build South Australia’s bee populations to help protect native plants and production from orchards and crops that rely on bee pollination. The project aims to retain and restore native vegetation that bees need to thrive, and to future-proof bee-dependent primary […]