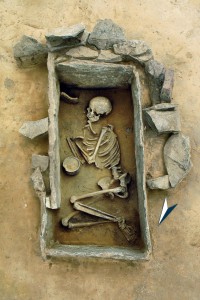 International research involving the University of Adelaide shows that the introduction of agriculture in Europe about 8500 years ago not only changed the way people lived but also left traces in their DNA.

Published in Nature, the researchers show the direct results of adaptation to changing diets, environments, disease-causing organisms, social organisation on the DNA of ancient European farmers. They document the results of selection on specific locations on DNA related to milk digestion, pigmentation and disease immunity.

Indirect evidence of this adaption can be detected in the patterns of genetic variation in today’s populations, the researchers say, but modern genomes are “just echoes” of the past and cannot directly be connected to specific events. However now, they report, the study of ancient human DNA makes it possible to watch how natural selection happened in real-time.

“We’ve been able to take advantage of improved DNA extraction techniques and the largest collection of genome-wide datasets from ancient human remains. This has allowed us to identify specific genes that changed during and after transition from hunting and gathering to farming in Europe,” says co-author Professor Alan Cooper, Director of the University of Adelaide’s Australian Centre for Ancient DNA.

The DNA came from the remains of 230 ancient individuals who lived between 3000 and 8500 years ago at different sites across what is now Europe, Siberia and Turkey.

Although the authors caution that sample size still remains a limitation, comparing the ancient genomes to one another and to those of present-day Europeans revealed 12 positions on the genome where natural selection related to the introduction of farming in northern latitudes appears to have happened.

Many of these changes (variants) occurred on genes that have been associated with fatty acid metabolism, vitamin D levels, light skin pigmentation and light eye colour, which are important given the decreasing exposure to sunlight in northern latitudes. Two variants appear on genes that have been linked to higher risk of celiac disease, but that may have been important in adapting to an early agricultural diet.

Other variants were located on immune-associated genes. “The Neolithic period involved an increase in population density, with people living close to one another and to domesticated animals,” says Dr Wolfgang Haak, one of three senior authors of the study, who did the research at the University of Adelaide and is now at Max Planck Institute for the Science of Human History in Germany. “Although that did not come fully as a surprise, it’s great to see it confirmed in ‘real-time’.”

“Some of these traits have been studied before,” says Harvard Medical School’s Professor David Reich, one of the senior authors. “This work with ancient DNA enriches our understanding of those traits and when they appeared.”

Being able to look at numerous positions across the genome also allowed the team to examine complex traits for the first time in ancient DNA, showing the evolution of height across time.

For the first time, researchers have been able to directly estimate the Anglo-Saxon ancestry of the British population from ancient skeletons, showing how Anglo-Saxon immigrants mixed with the native population. Human remains excavated from burial sites near Cambridge provided the material for the first whole-genome sequences of ancient British DNA. Using a new analysis method […]

International research involving the University of Adelaide has shed new light on the origins of some of the most widely spoken languages in the world. Three billion people today speak a language that is part of the Indo-European family of languages, spanning Europe as well as Central, Western and South Asia. But the reason why […]

Researchers Prof Alan Cooper and Dr Wolfgang Haak from the Australian Centre for Ancient DNA along with an international team of experts have sequenced the genomes of a ~7,000-year-old farmer from Germany and eight ~8,000-year-old hunter-gatherers from Luxembourg and Sweden. The findings have been published in Nature today. Upon analysis of the genomes, researchers found that most present-day Europeans derive from […]