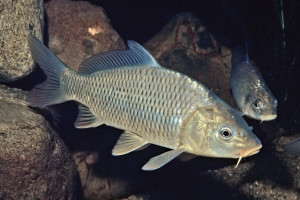 Heidi Alleway, Professor Bronwyn Gillanders and Professor Sean Connell from the University of Adelaide’s Environment Institute have found that the colonisation of Australia contributed to an overexploitation of inland fisheries species.

Their paper entitled, ” ‘Neo-Europe’ and its ecological consequences: the example of systematic degradation in Australia’s inland fisheries,” published in Biology Letters, compared fish market records from 1900-1946 against modern statistics of 1987-2011, and found that previously common native inland species have now deteriorated to the point that fishing is now limited, and conservation regulations exist.

This pattern of demand driving changes from fresh water to marine fisheries also occurred in Europe, and further reinforces the proposition that this pattern was based on societal expectations. Also with European settlement came the introduction of non-native fish, which also led to the overexploitation and degredation of native inland fisheries species in Australia.

The concept of neo-Europe especially could establish and motivate more accurate baselines for management.

These findings highlight that the outcomes shown in other European settled countries such as Canada and the US could have predicted the consequence of neo-European colonisation to Australia’s ecosystem.

Review of human effects on ecological connectivity in aquatic ecosystems

Professor Bronwyn Gillanders and Associate Professor Ivan Nagelkerken from the University of Adelaide’s Environment Institute were among 17 scientists involved in an article published in Science of The Total Environment. The article entitled “Human effects on ecological connectivity in aquatic ecosystems: Integrating scientific approaches to support management and mitigation,” reviews human activities that effect the […]

Professor Bronwyn Gillanders from the University of Adelaide’s Environment Institute was one of eight researchers involved in an article published in Marine & Freshwater Research, entitled, “Population structure in a wide-ranging coastal teleost (Argyrosomus japonicus, Sciaenidae) reflects marine biogeography across southern Australia“. In an effort to aid conservation, fisheries management and restocking programs, the researchers […]