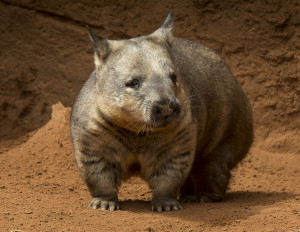 For the first time ever, researchers from the University of Adelaide have been able to non-invasively study the inner workings of wombat warrens, with a little help from ground-penetrating radar.

Despite being the faunal emblem of South Australia, very little is known about the burrowing habits of the southern hairy-nosed wombat.

As part of a larger study into wombat conservation, Mr Michael Swinbourne, PhD candidate in the University’s School of Biological Sciences, set out to test a new way of mapping wombat warrens. His research has been published in the peer-reviewed journal Wildlife Research.

“A major problem we are grappling with is understanding just how many wombats there are and whether their numbers are increasing or decreasing,” Mr Swinbourne says.

“At the moment we use satellite imagery to count the warrens and then use that information to estimate the numbers of wombats living inside. This method isn’t perfect because we don’t know much about how wombats share their warrens.”

Using ground-penetrating radar meant Mr Swinbourne and his team were able to map warrens built underneath thick layers of hard limestone – which occurs throughout much of the wombat’s range.

“The aim of this project was to map the extent of wombat warrens in different ground conditions; to gain a better understanding of the relationship between how they look on the outside and what goes on underneath,” he says.

They found warrens built under limestone differ substantially to soil warrens, being an extensive series of tunnels and chambers rather than simply a discrete tunnel underground.

“These findings have important implications for how we estimate the numbers of wombats, and also how we think about the social structure of a wombat colony. They might be more social than we previously thought,” Mr Swinbourne says.

Wombats are considered an agricultural pest because their burrowing activity can cause damage to farm infrastructure and equipment as well as crops.

Lessening the southern hairy-nosed wombat’s impact on agriculture on one hand, while conserving it on the other, continues to be a significant challenge for conservationists.

Wombats Through Time and Space Conference 2018

The Wombat Conference will be a celebration of research into all things wombat, and the 20th anniversary of the first edition of the Wombat book, fondly known as ‘The Wombat Bible’. When: 17th – 19th September 2018 Where: The University of Adelaide, Adelaide, South Australia 5005 Book: Eventbrite – Early bird and single day tickets available. This 3-day […]

Join Ewart Shaw from Radio Adelaide on his show Orbit, as he talks with the Environment Institute’s Michael Swinbourne. Swinbourne explores the underground burrows of wombats. But how do you explore a wombat burrow without destroying it or disturbing the wombat? The solution- Radar! Listen to the podcast to find out more.