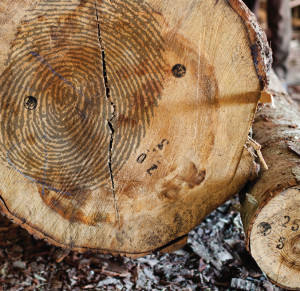 Four defendants prosecuted for stealing Bigleaf maple wood from the Gifford Pinchot National Forest have pleaded guilty, in a case that marks the first time the US government has prosecuted for illegal interstate trade of wood products under the Lacey Act. The Lacey Act is a US wildlife protection law that was amended in 2008 to include plants, making it illegal to trade in illegally sourced wood products. 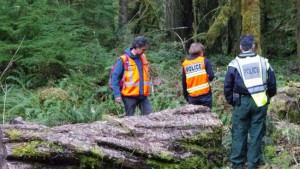 Professor Andrew Lowe with US police

DNA evidence developed by a consortium of experts led by the University of Adelaide was an important element of the government’s case against the timber thieves.

Researchers from the University’s Environment Institute developed DNA markers for the Bigleaf maple population. They joined the US Forest Service and timber-tracking specialists Double Helix Tracking Technologies, with help from World Resources Institute, to develop the first DNA profiling reference database for the species. It’s the only one of its kind for trees that has been validated for use in court proceedings.

Just like individual humans, each tree has a unique genetic fingerprint, making it possible to match pieces of sawn wood with the stumps of the trees from which they were cut, using a technique called DNA profiling.

“With this technology, wood buyers can verify whether or not Bigleaf maple has been legally harvested,” says Professor Andrew Lowe, Chair of Conservation Biology at the University of Adelaide, and Chief Scientific Officer of Double Helix.

“Our database indicates that, with these markers, the likelihood of two trees having the same DNA profile is as low as one in 428 sextillion; there are thought to be approximately 70 sextillion stars in the universe.”

Within the United States, the theft of Bigleaf maple from public lands in the Pacific Northwest has been a persistent problem. Distortions in maple wood grain can create patterns prized by woodworkers and used particularly in the musical instrument trade to make unique guitars. When milled, a single log of maple can be worth more than $100,000.

“This project has been a fantastic team effort here at Adelaide and we are all really proud that our work has helped secure such a landmark conviction,” Dr Dormontt says.

“Illegal logging is a significant problem across the world, contributing to the destruction of the world’s forests and oppression of many of its most vulnerable people. DNA profiling and tracking of timber provides a means to help curb this illegal activity and support legitimate forest industries.”

Timber theft and illegal trade affects a large proportion of the world’s trade in forest products. In the case of Bigleaf maple, an inability to definitively match seized timber back to suspected theft sites have made previous prosecutions difficult.

The DNA markers that were developed for this study have been peer-reviewed and were recently published in the journal Conservation Genetic Resources.

The Environment Institute’s Dr Eleanor Dormontt has been featured in the latest edition of New Scientist, sharing her insights into the illegal timber trade. The New Scientist article delves into the promises of new technologies, such as DNA analysis, to hamper the illegal wildlife and timber trade. Dr Eleanor Dormontt speaks about the barriers to employing these potential […]

Dr Eleanor Dormontt was recently part of a team to provide vital genetic information used in a successful prosecution of illegal timber traders in the US. Eleanor was recently interviewed by Robyn Williams for the ABC Radio National Science Show. As she explains, when the value of the products made from that single tree can be in excess […]

Did you know that over 400 new species were discovered in the Amazon between 2010-2013 alone? This is just the tip of the iceberg. Professor Andrew Lowe of the Environment Institute says: “Of the estimated 10 million species that exist on our planet, only just over a million have so far been identified and described”. […]

The application of DNA to timber tracking is another milestone in the valuable use of DNA in tackling crime. Australian Geographic recently featured an article on this technology that is generating significant interest in the timber industry. The DNA testing technology is developed by researchers from the Australian Centre for Evolutionary Biology & Biodiversity at […]