Media Release: Squids on the rise as oceans change

Unlike the declining populations of many fish species, the number of cephalopods (octopus, cuttlefish and squid) has increased in the world’s oceans over the past 60 years, a University of Adelaide study has found. 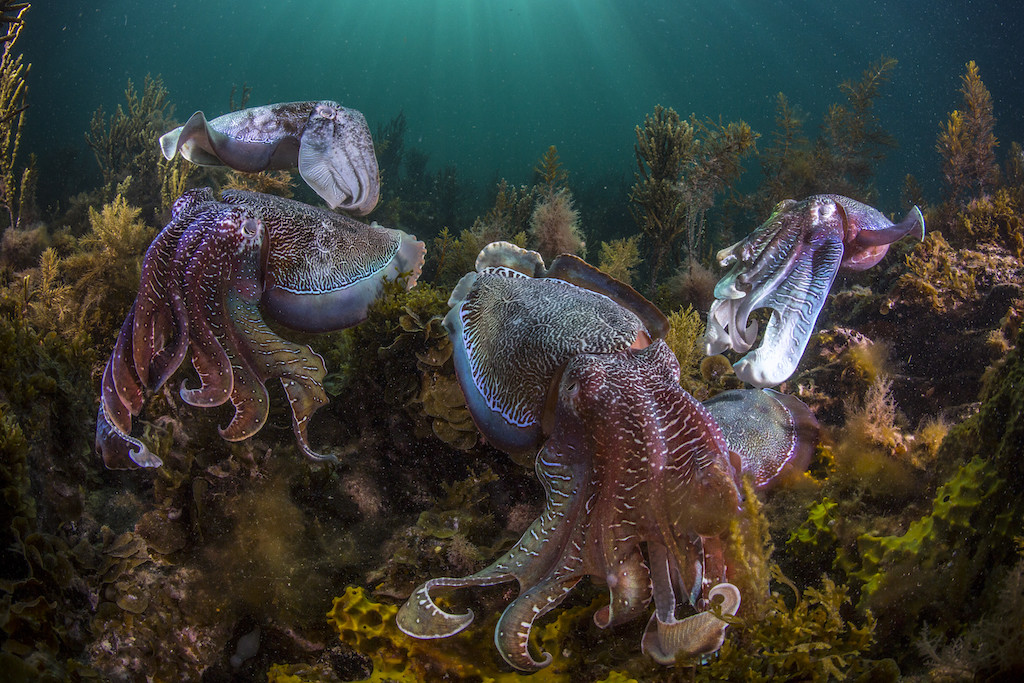 “Our analyses showed that cephalopod abundance has increased since the 1950s, a result that was remarkably consistent across three distinct groups,” says lead author Dr Zoë Doubleday, Research Fellow in the Environment Institute and School of Biological Sciences.

“Cephalopods are often called ‘weeds of the sea’ as they have a unique set of biological traits, including rapid growth, short lifespans and flexible development. These allow them to adapt to changing environmental conditions (such as temperature) more quickly than many other marine species, which suggests that they may be benefiting from a changing ocean environment.”

Dr Doubleday says the research stemmed from an investigation of declining numbers of the iconic Giant Australian cuttlefish. “There has been a lot of concern over declining numbers of the iconic Giant Australian cuttlefish at the world-renowned breeding ground in South Australia’s Spencer Gulf,” Dr Doubleday says. “To determine if similar patterns were occurring elsewhere, we compiled this global-scale database. Surprisingly, analyses revealed that cephalopods, as a whole, are in fact increasing; and since this study, cuttlefish numbers from this iconic population near Whyalla are luckily bouncing back.”

Project leader Professor Bronwyn Gillanders says large-scale changes to the marine environment, brought about by human activities, may be driving the global increase in cephalopods. “Cephalopods are an ecologically and commercially important group of invertebrates that are highly sensitive to changes in the environment,” Professor Gillanders says. “We’re currently investigating what may be causing them to proliferate – global warming and overfishing of fish species are two theories. It is a difficult, but important question to answer, as it may tell us an even bigger story about how human activities are changing the ocean.”

Cephalopods are found in all marine habitats and, as well as being voracious predators, they are also an important source of food for many marine species, as well as humans. “As such, the increase in abundance has significant and complex implications for both the marine food web and us,” says Dr Doubleday.

Climate change often means doom and gloom for most species on the planet, but thankfully, the cephalopods are different. Squids, octopus and cuttlefish are increasing in population around the world, even as oceans warm and become more acidic. The secret to their success may come down to their evolutionary adaptability, which enables them to cope with […]

“Squidlings” take out the Peer Prize for Women!

Research on the worldwide rise of cephalopod populations has taken the world by storm recently, and now the “Squidlings” research team, led by Dr Zoe Doubleday and Professor Bronwyn Gillanders has taken out the inaugural “Peer Prize for Women“! The competition called for votes from the researchers’ “peers”. Only verified researchers were able to cast […]

6 months, 60 experts and 37 threats to the Spencer Gulf- a lesson in rapid assessment

The Spencer Gulf covers an area of diverse marine habitats ranging from algal forests to mangroves. But increasingly, threats from climate change, fishing, invasive species and more pose an increasing threat to these fragile ecosystems. Dr Zoe Doubleday is part of a 60-person team to rapidly assess the multitude of threats to the many Spencer […]

Join Ewart Shaw from Radio Adelaide on his show Orbit, as he talks with the Environment Institute’s Dr Zoe Doubleday. Dr Zoe Doubleday explores the underwater world of the octopus and squid. With climate change transforming marine environments, how have these creatures fared? It turns out,they’re doing pretty well! Listen to the podcast to find out […]

Marine biology research published in the journal Current Biology has made a splash worldwide today, getting coverage in Science Mag, The Guardian, The Washington Post, and many more including an in-depth piece in The Atlantic by Ed Yong, and a live cross with ABC News 24. This paper now ranks in the top 0.02% of publications ever […]

Giant Cuttlefish returns to the Spencer Gulf for Coitis

South Australian scientists are ecstatic to find that the Great Australian Cuttlefish has returned to the Spencer Gulf for breeding this year. Their numbers have been down over the last few years and scientists don’t know why, or where they went. The cuttlefish, with it’s blue blood pumped through three hearts, and the ability to […]

Despite the ecological and growing commercial significance of cuttlefish, the successful management of these fisheries is hindered by the inability to assess population structure and connectivity. How many animals live in what places and how and when do they move between locations? While significant progress in recent years has improved our understanding of migration patterns […]

This entry was posted in MBP, Media Release, Publications and tagged Zoe Doubleday. Bookmark the permalink.