Media Release: When it comes to claws, right-handed attracts the girls 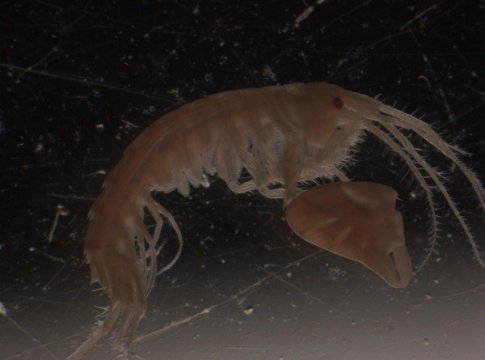 A tiny marine crustacean with a great big claw has shown that not only does size matter, but left or right-handedness (or in this case, left or right-clawedness) is important too.

The 5-6mm marine amphipod Dulichiella appendiculata, related to the land-based beach-hopper or sand flea we see hopping around on beaches, has one large claw on one side (either right or left), and a small claw on the opposite side.

A University of Adelaide study of the amphipod, published in the Journal of Crustacean Biology, has discovered that males with the large claw on the right-hand side are more gregarious and attract more females than their left-clawed competitors.

“Having a large claw on one side is a really cool aspect to this species,” says Dr Pablo Munguia, ecologist and evolutionary biologist at the University of Adelaide’s School of Biological Sciences.

“While it’s common for males to have large structures of various kinds to attract females – think elk horns or peacock tails – there are very few species in nature with such asymmetry. The only other species are also crustaceans, such as male fiddler crabs, which also have one large claw.

“But in this case, it’s not just the size that matters. With Dulichiella appendiculata the right-clawed males not only have a larger claw than the left-clawed males but they are more gregarious, hanging out with other males as well as attracting more females.

This crustacean is found in small rocky reefs in Florida and now Dr Munguia is expanding his research to include amphipods across Australia and the south-western Pacific.

The big claw, while helpful in fending off other males, gets somewhat in the way during fertilisation.

“The large claw is physiologically expensive, requiring a lot of energy to make and carry around, and it’s probably hampering their ability to reproduce. This is probably why these species aren’t more common ,” Dr Munguia says.

Dr Munguia has recently been appointed as a member of the editorial board for Oecologia (only 1 of 4 Australian based scientists on the board) an important ecology journal.

Join Ewart Shaw from Radio Adelaide on his show Orbit, as he talks with the Environment Institute’s Dr Pablo Munguia. Dr Munguia introduces us to Dulichiella Appendiculata, a tiny but entirely fascinating little creature that has attracted the attention of ecologists. Listen to the podcast to find out more