The sinking of HMAS Sydney in November 1941 remains one of Australia’s greatest naval disasters. All hands on deck were lost and just one unidentified body was recovered from the wreckage.

As the 75th anniversary of this historic wreckage approaches, the Navy is renewing calls for family to provide DNA to name the unknown sailor.

Learn more about this maritime mystery and Austin’s work, by watching the interview with Jeremy Austin on ABC news, which aired on the 11th of June, 2016. 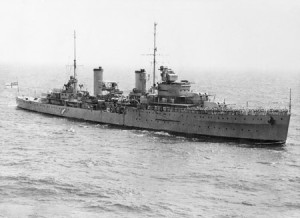 You can help recover our lost ANZACS – with your DNA

This post is by Jeremy Austin and was originally published on the Australian Centre for Ancient DNA (ACAD) Blog, under the title “Recovery and identification of missing servicemen” As we approach the commemoration of ANZAC Day, we are reminded of the more than 25,000 Australian servicemen missing in action who have yet to be recovered and […]

As the success of TV series like Silent Witness and CSI proves, the world is hooked on small-screen forensics. But as this special Research Tuesdays Forum showed, our local expertise renders these stylised fictions dull by comparison. Associate Jeremy Austin was one of the leading forensics-focused University of Adelaide researchers, who’s presentations showed how: dental evidence is […]

This entry was posted in ACAD, News and tagged HMAS Sydney, Jeremy Austin. Bookmark the permalink.