A common close partnership which sees baby fish sheltering from predators among the poisonous tentacles of jellyfish will be harmed under predicted ocean acidification, a new University of Adelaide study has found. 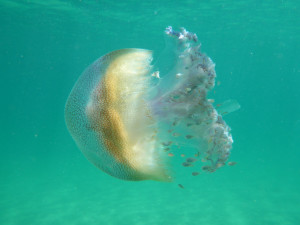 Published today in the journal Proceedings of the Royal Society B, the researchers say that modification of this baby fish-jellyfish symbiotic relationship is likely to lead to higher mortality among the affected fish species which include some of the common commercial fish. A well-known example of marine symbiosis is the relationship between anemones and clown-fish, popularised in the animated movie, Finding Nemo.

“These intricate, interdependent relationships between different species─symbioses─are common in both the marine and terrestrial environments,” says study leader Associate Professor Ivan Nagelkerken, in the University of Adelaide’s Environment Institute.

“But, apart from the well-known relationship between coral and microalgae and what happens during a bleaching event, little is known about how climate change and predicted ocean acidification will affect such relationships.

“This is the first study that demonstrates how climate change will disturb such a symbiotic relationship between two animals that interact closely for survival.”

The juvenile fish of about 80 different species, including important commercial varieties such as pollock, jacks and trevallies, form symbiotic relationships with jellyfish.

The jellyfish blooms are an ideal protective habitat for the baby fish, which would otherwise be unprotected in the open oceans where they are at high risk of being eaten by bigger fish and other marine life. Only one species of fish has known immunity to the jellyfish venom. Somehow the baby fish avoid the poisonous tentacles of the jellyfish while swimming among them, while other species stay well away.

The researchers studied the actions of juvenile fish in an aquarium under high CO 2 conditions. Compared to the control group, they spent much less time with the jellyfish host (about three times less), while only 63% (compared to 86%) initiated any relationship at all.

The research is in collaboration with Associate Professor Kylie Pitt at Griffith University. “Shelter is not widely available in open water so juvenile fish rely on the jellyfish for protection against predators,” says Associate Professor Pitt. “As shelter providers, the jellyfish could play a role in enhancing the populations of these fish species. Changing ocean conditions are likely to have significant negative impacts on this relationship and therefore, fish populations.”

This research has been featured in Discover Magazine.

Snapping shrimps, the loudest invertebrate in the ocean, may be silenced under increasing ocean acidification, a University of Adelaide study has found. Published today in the journal Proceedings of the Royal Society B, the researchers report that under forecast levels of CO2 predicted to be found in oceans by the end of the century, the […]

Associate Professor Ivan Nagelkerken talks with The Wire radio about how ocean acidification not only directly effects marine life, but also indirectly by changing fish behaviours, such as how they source food or avoid predators for example. Listen to the audio.