Why are scenarios one of the best tools for planning?

Thinking about the future in decision making and planning processes is critical. In this article we look at one of the best tools to do this: Scenario planning. 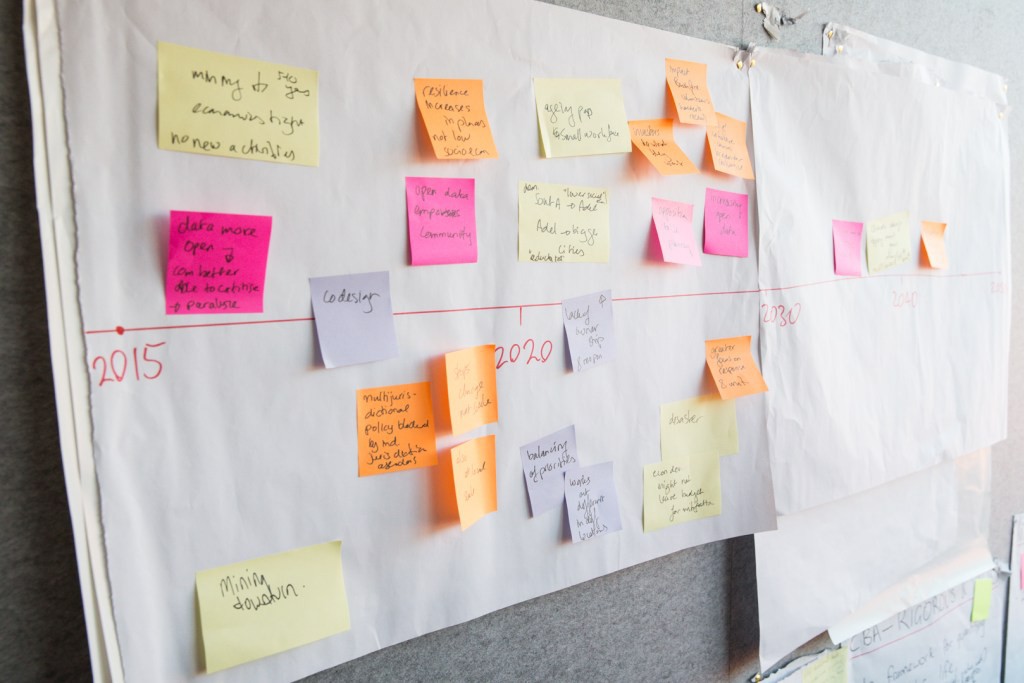 Thinking about the future reveals many questions

When we think about how our own lives will change in the future, it is full of uncertainties. Missed or taken opportunities. Unexpected offers. Then turning of the years brings with it new challenges and benefits.

But when we think about how a city will develop, it is the tale of all of its inhabitants. How will they live? Where will they work? And how will they get there?

These are a few of the more obvious questions related to urban development. The answers are a mixing pot of an individual’s choices. They are choices based on many things including:

When we put all these factors together, the future starts becoming uncertain.

‘All of which is to say that I’m not sure what 2010 will look like, but I’m sure that it will be very little like we expect, so we should plan accordingly.’

But how do we plan ‘accordingly’?

In the Intelligent Water Decisions Research Group, we use several methods for attacking challenges to infrastructure or strategic planning.

For infrastructure problems, we look to develop robust or adaptive systems. Those systems must be capable of reaching their performance requirement under various future conditions. An example is the article here by Jeff Newman on the optimisation of water systems.

For broader strategic challenges we help by developing exploratory scenarios. We see how they can be integrated into scenario planning approaches.

Exploratory scenarios begin with the question, what could happen? The exploration of the future is based on two things. The first is a consideration of the main drivers of a system. The second is plotting out various coherent timelines for each driver. We use the latter to create diverse, and creative but plausible futures of a system.

We recently developed and delivered a scenario process with members of South Australia’s State Mitigation Advisory Group. This group advises cabinet on a range of natural and man-made hazards. The process involved a series of workshops. It was developed andfacilitated by members of IWDG. We developed five scenarios for Greater Adelaide in 2050.

The scenarios mapped out various drivers and how they would interact. They showed how risk would change over the next 35 years. See a recent article in Fire Australia on some of the work.

How the scenarios worked

The scenarios were built on two questions. The first was how effective mitigation policies would be. The second was how resilient the community would be. Framing the exploration of the future on these questions allowed the scenarios to focus on the policy responses available to government.

The process used an integrated model that we developed with our colleagues in the Netherlands, RIKS. The model allowed five stories of the future to be translated to quantitative inputs. Using this model, we also explored how various land uses and developments progressed over the time period. It considered how these developments would  impact on future risk. (You can learn more about this by reading my previous article, which was on the importance of including exposure in risk assessments).

The importance of considering the future in decision making and planning processes is critical. Scenario planning is a great tool to use for considering the strategic challenges faced by governments and private companies. The process is valuable because it brings stakeholders together in complex decision-making environments. Yet it also the parties involved to build trust and consensus.

To explore how a scenario planning process could help you in your work, please contact me at graeme.riddell@adelaide.edu.au.

This article was written by Graeme Riddell and was originally published in Intelligent Water Decisions.

The future is always uncertain but it’s best to be prepared, especially when it comes to potential disasters. The Bushfire and Natural Hazards CRC (BNHCRC) has published a report exploring the risk of future disasters within Greater Adelaide. The Futures Greater Adelaide 2050: An exploration of disaster risk and the future report is designed to help decision makers plan […]

Water is one of the most precious resources and water resource systems are in need of informed management. However, many water resource systems today rely on historical assumptions about inflows, assumptions that are flawed due to our changing climate. Therefore, new approaches to optimising policies for water systems are needed. The challenge of optimising our water systems has been […]