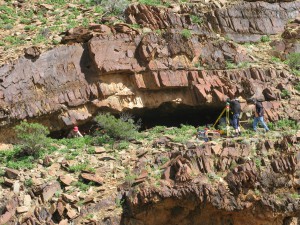 Published in Nature, the findings from the Warratyi Rock Shelter in the desert region of northern South Australia, show it to contain the oldest evidence of Aboriginal occupation in South Australia. Humans arrived in Australia about 50,000 years ago but the timing of their settlement in arid regions and cultural innovation have been uncertain.

The project was led by arid zone research archaeologist Giles Hamm, an Honorary Fellow of the South Australian Museum and La Trobe University PhD candidate, working with geochronology specialists at the University of Adelaide Dr Lee Arnold and Professor Nigel Spooner, along with geomorphologist Dr Peter Mitchell, and other researchers from Flinders University and the University of Queensland. They have worked for the last nine years with the Adnyamathanha people in the Flinders Ranges.

The study suggests that people settled in the arid interior within a few millennia of arriving on the continent and shows that they developed key technologies and cultural practices much earlier than previously thought for Australia and Southeast Asia.

“One of the key strengths of this study is the chronology, which has typically proved to be a contentious issue at early archaeological sites in Australia, says Dr Arnold, ARC Future Fellow with the University of Adelaide’s Environment Institute. “We have used a range of complementary dating techniques and targeted different types of materials to ensure that the age of the site is reliably known.”

The team applied a novel sediment dating technique known as single-grain optically stimulated luminescence (OSL) dating to determine when the fossil and artefact bearing sediments were deposited. Combined with statistical techniques, they were able to determine a precise occupation history for the archaeological site.

The OSL dating research was conducted at the University of Adelaide’s Prescott Environmental Luminescence Laboratory – one of the largest and best equipment dating laboratories in the world in this field.

“The Warratyi Rock Shelter is a remarkable discovery, showing aboriginal settlement of the Australian arid zone long before the last ice age and contemporaneous with iconic Australian megafauna, and revealing an innovative material culture, including the utilisation of ochre pigments, much earlier than previously recorded for Australia and Southeast Asia,” says Professor Spooner.

This story has been featured in media outlets around the world including The Conversation, ABC, BBC, Cosmos Magazine, The Guardian, Sydney Morning Herald, Australian Geographic, and many more.