The illegal reptile trade in Australia, including venomous snakes, could put our wildlife, the environment and human lives at risk, a new study has found.

University of Adelaide researchers, supported by the Invasive Animals Co-operative Research Centre, have developed a model of the likelihood of establishment of alien species of snakes and other reptiles if they are introduced to the wild, accidentally or on purpose. The research has been published in the journal Conservation Letters.

There is an existing legal trade in pet reptiles that are native to Australia, but alien reptiles cannot be legally imported or kept for private trade.

In their analysis, based on 28 alien reptile species that had been seized by the Victorian Government during 1999-2012, the researchers showed that 5 out of the 28 (18%) were likely to succeed in becoming established in the wild. This could be as high as 12 out of 28 if there was at least three releases of the same species and no recapture or control.

10 out of the 28 species screened – all species seized from the black market ­– were venomous snakes.

“Since 1999 alien reptiles (including snakes and turtles) have been the most common animals intercepted by various border and on-shore controls,” says lead author Pablo García-Díaz, a PhD candidate in the Invasion Ecology Group, University of Adelaide.

“There is a thriving black market in reptiles in Australia and this illegal trade represents a serious challenge and risk to human and wildlife wellbeing.” 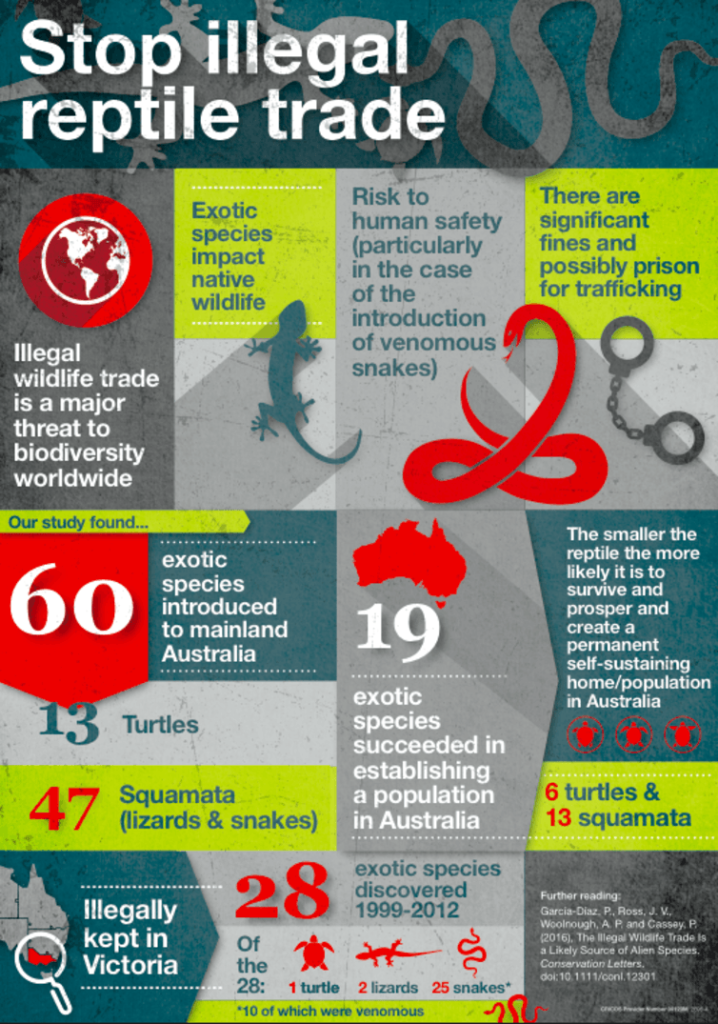 The researchers say the potential threat to wildlife and the environment should not be underestimated.

“Illegal wildlife trade is a major threat to biodiversity worldwide,” says Project leader Associate Professor Phill Cassey. “In the regions where the animals are being taken from, unsustainable harvesting levels are driving population declines. And in the regions where they are being introduced, the illegal trade represents a likely source of new alien species to disrupt the local ecosystems and, in the case of venomous snakes, pose a potential threat to humans.”

The researchers found that smaller reptiles and those released more often into the wild were more likely to establish self-sustaining populations.

Dr Michelle Christy, National Incursion Response Facilitator for Invasive Animals CRC, is concerned by the number of reptiles being smuggled into Australia and what will happen if they are released into the wild. “Reptiles are particularly difficult to find, and the likelihood of eradicating an introduced population once it has established is very low,” she says. “This very important emerging issue highlights the importance of incursion prevention, detection, and rapid response plans for introduced snakes.”

The devil within: the risk of illegal pet reptiles