Behind the Artist: Andy McIntyre on ‘Traceable’

More often than not, science alone is not enough to bring about change. A message born from scientific research requires emotion and context to cut through to the masses. For our latest research into the illegal timber trade, we wanted to spread far and wide the issue of illegal logging. To do so, we teamed up with local Adelaide artist Andy McIntyre.

The illegal timber industry is vicious, causing widespread destruction of wildlife and forests around the world. The industry is estimated to be worth up to $100billion each year. Research led by Professor Andy Lowe and Dr Eleanor Dormontt demonstrated that cutting-edge forensic techniques can be used to trace the origin of the illegally logged timber and hence, catch timber thieves.

McIntyre was tasked with creating an artistic interpretation of the illegal logging issue to raise awareness amongst the wider community. “My very first thought for the illustration was the barcode layout,” says McIntyre, who came up with Traceable, a lead pencil illustration with a splash of digital red. 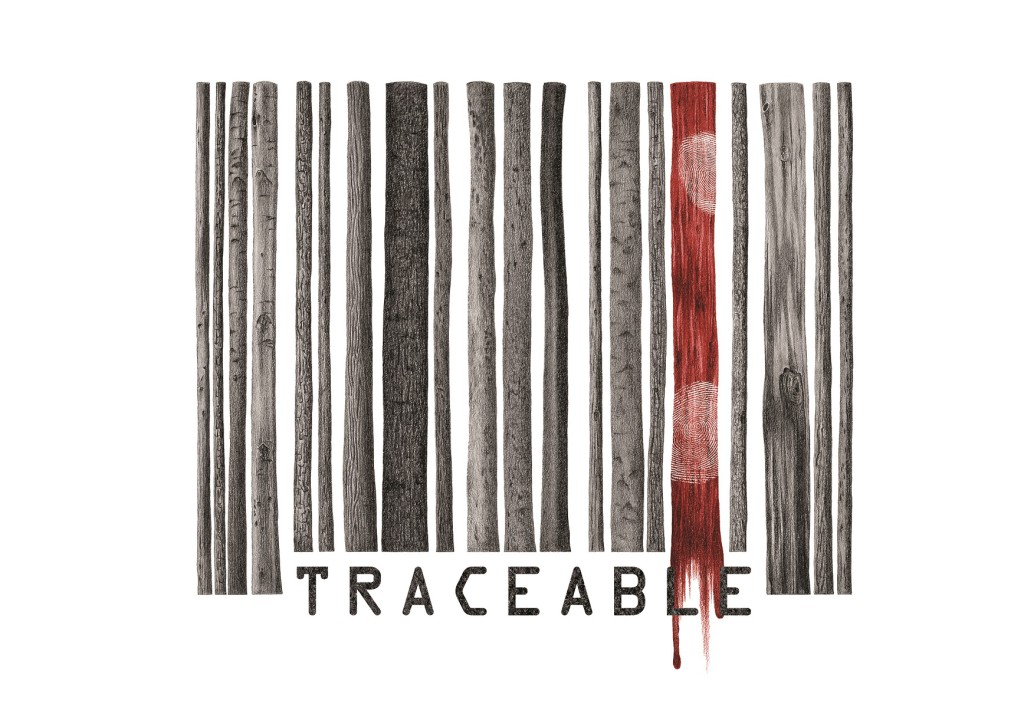 “It was a direct visual reference to the DNA identification process and also enabled me to perfectly highlight the timbers point of infiltration in the supply chain and it’s traceability, which was the key message. It is also an image structure we all recognise.”

Amidst the black and white of the penciled trunks is a single red-coloured log, a bleeding representation of the illegal timber industry. Two fingerprint marks are impressed on the blood-stained log, a notable nod to the use of forensic techniques to identify and trace the origin of the stolen timber.

“The colour of the ‘illegal’ log was used to strengthen that point. With that in mind I wanted to make a strong statement on the devastating impact that illegal logging has on the local environment and communities. That is why I chose red and had the timber morphing into ‘blood’ at the bottom. I wanted the image to be informative and confrontational. Finally the fingerprints were also added to the ‘illegal’ timber to show the identification and traceability of the timber’s origin and point of infiltration in the supply chain.”

The task of translating science into a visual message to the masses can sometimes be a challenge. But for McIntyre, that’s not where the true challenge lay.

It wasn’t too hard translating this scientific practice into a visual representation. The fact the ‘hero’ of the story – the timber, is something we can all identify, made the connection easier. The hardest part was creating a visual ‘story’ that people would be able to understand without needing a scientific background.

We thank Andy McIntyre for his help in communicating the important message to #stopillegallogging.

Timber guide launched to crack down on illegal trafficking

A new guide on the illegal timber trade has been released in a global effort to clamp down on timber trafficking crimes. The Best Practice Guide for Forensic and Timber Identification was prepared by the United Nations Office on Drug and Crime (UNODC), with a substantial contribution from the Environment Institute’s Dr Eleanor Dormontt. Dr Dormontt is […]

Dr Eleanor Dormontt was recently part of a team to provide vital genetic information used in a successful prosecution of illegal timber traders in the US. Eleanor was recently interviewed by Robyn Williams for the ABC Radio National Science Show. As she explains, when the value of the products made from that single tree can be in excess […]